Poetry travels in the time of quarantine 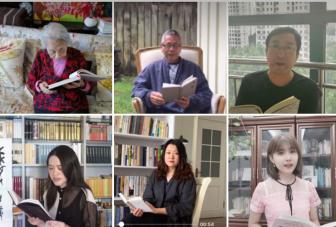 25 mei 2020
These are rare, precious videos of poets from China reading from their homes in the time of quarantine: Zheng Min, 100 years old this year, reading her poem "Golden Rice Sheaves", a classic of the modernist poetry during the war time in the 1940s; Lü De’an, a contemporary hermit, reading from his backyard; Xuanyuan Shike, an active member of the "spoken language" movement whose poetry is sophisticated while bearing the typical humor of spoken language poetry; and three young women poets, a feminist, a non-feminist and an ethnic "minority" poet, born in different decades and from different corners of China.
隔离时期 诗在飞行——中国诗人朗诵视频第一辑


Golden rice stands in sheaves
in the newly cut autumn field.
I think of droves of exhausted mothers,
I see rugged faces along the road at dusk.
On the day of harvest, a full moon hangs
atop the towering trees,
and in the twilight, distant mountains
approach my heart.
Nothing is more quiet than this, a statue
shouldering so much weariness—
you lower your head in thought
in the unending autumn field.
Silence. Silence. History is nothing
but a small stream flowing under your feet.
You stand where the rice is, your thought
becoming a thought of the human race.

Zheng Min (1920-) was born in Beijing while her family was originally from Fujian, southeast China. She graduated from the legendary Southwest United University in 1943, and studied literature and philosophy at Brown University in the US, earning a master’s degree in 1952. She returned to China in 1955 and taught at Beijing Normal University from 1960 until her retirement in 2006. She is the last living member of the Nine Leaves group of poets who were active modernists in the 1940s and whose collection of poetry was published in 1981, titled Nine Leaves, which became the name of this group of nine poets who were influenced by the western Modernism but at the same time deeply rooted in the social reality of China.


But they’re local—the roof guys
of roof guys who really know
roofs. They move
in the same fashion
with the same caution. When they walk on the roofs
even the clay tiles crack
in the same direction.
They are careful but still
you can hear the
creaking.
Open one up—dust rises
like tiny insects
resurrected. Every being lives
for the same purpose—
to be opened.
Roof guys come and go
replacing each other’s faces.
At sunset, they disappear.
But this time they remain—as our specimens,
awkwardly moving, one by one
on the roofs.
Looking toward them, you find them gone,
and yet they seem to have stayed the night,
or an entire age.

Lü De’an (1960-), born in a small town in Fujian province, started writing poetry in the late 1970s. He was a member of the Friday poetry group and the They poetry circle. He lived in New York City from 1991 to 1994 as an artist and returned to China in 1995. He built a stone house in the mountains in his hometown and became a modern hermit until his third collection of poetry came out in 2010, which won the Gaoligong Literature Award in China in 2011. Currently he lives between Fujian and Canada.


There is another universe
outside ours, half a beat slower
where babies are born late
and trees grow slowly
No high-speed trains. No freeways
To visit a neighbor, you need to carry some food
Marathon? Might as well be walking
Walking? Might as well be pacing around
The clock’s second hand moves like the sun
taking a long time to move a single step

There’re never queues before windows
Things are done slowly, might as well not be done at all
so that no one will need a document
You can easily go abroad but never reach a border in your life
You can easily go astray but can never get out of your family circle
There is no smog in the sky
Smoke gets exhausted before climbing out of the chimney
People speak slowly
Their brains don’t make sharp turns
If you see a friend and say hello
you can go to a slow food restaurant on the roadside
When you finish eating and get outside
you will then hear his response

Xuanyuan Shike (1971-) is a veteran member of the Lower Body Poetry group that was started by Shen Haobo in 2000 and also an active member of the “spoken language new poetry canon” movement led by Yi Sha in the 21st century. He was born in Shandong province and grew up there. He launched a magazine with his local friends in 1999 named Middle, published three books of poetry and won the poetry prize of the national People’ Literature Award in 2012.


Poetry doesn't know that it's dead.
A state funeral is taking place on a 1000 hole golf course,
its eyelids are sprinkled with petals, and on the petals a few teardrops,
one from Greek, one from Latin
and the rest from crocodiles.
An epitaph is written in Chinese oracle script.
All that have two legs have witnessed its death, it died finally
shrouded in black and gold,
its mouth faintly grinning.

Grasshoppers are alive, so are lizards and butterflies.
All that crawl or fly are alive.
Dinosaurs are walking to the zoo with children for a spring outing,
their small bellies bulging with fresh milk.
The Pope is alive, on his way to Africa by air.
Africa is alive.
Robots of the ninth generation will be alive too.
Poetry is dead, but doesn't know it yet.
Still dreaming of parachuting in heaven with all the living,
small or pregnant.
Still dreaming of shooting off rockets.
Of running marathons in Third World streets
with a bulletproof vest.

In the funeral a child sees poetry still rolling its eyes
under its lids.
It has donated its corneas—
it will never see its own death.

(Translated from Chinese by Ming Di and Neil Aitken)

Lü Yue was born in Hubei in 1972, graduated from East China Normal University in Shanghai in 1993, and worked for a Guangdong newspaper for a number of years before moving to Beijing to work for a new media. An outspoken poet, Lü Yue's feminist poem “The woman who sabotaged the rituals” was made into a play. She has received several literary awards including the Luo Yihe Poetry Prize. After obtaining a doctoral degree in literature from Beijing Normal University, she started working as the associate director of the October Literary Institute in 2019.


I see you pray in your father’s style today,
your little body curled up in bed, bent.
As we play peekaboo I pull up your little pajamas
and see your little pearl-like ribs, your spine
extending into a soft, pale lineup, a little army
toward your big head. Soon you start to cry
and that’s your evening ritual.

The moon is high, not yet in the clouds,
sprinkling brilliant light to the blue tops of factory
shops, sparkling. Ten thousand things quiet down
like peaceful ocean waves
waiting, with us, for the high tide
to sail into deep sleep.

Yuan Yongping (1983-) was born in Heilongjiang province, northeast China. She was a journalist before becoming a literary editor for a publishing house there. She won the DJS First Poetry Book in 2012 for her book titled Private Life. She has since published two more books of poetry. Her translation of Don't Read Poetry by Stephen Burt is forthcoming in 2020. She lives in Harbin.


Like two old men, the two bamboo baskets sit
side by side on a wooden bench by the door
looking quietly at the cornfield—
a flying bird passes by, singing.
They gaze into their favorite slow breeze in the afternoon,
tranquility dispersed in the air, the yellowed years.
The two aged bamboo baskets have year after year
loaded so many things: banana pears,
banana apples, and pearl-like peanuts.
Now they are empty, the bamboo sticks stunned,
their bodies wrapped with hemp ropes,
fatigued and lifeless.
In the past they fell deeply in love with the fall
but now they fall in the shadow of the season
that has changed instantly, from warm to desolate,
the memories framed on the trees
as they harvest year after year and have harvested
an entire life, now blown

away by a gust of wind.
A tree full of fruit, and two bamboo baskets:
they don’t know how they can be loaded again.
For the first time they face the harvest
at a loss, but calmly.

Su Xiaoyan (1992-) is a Mongolian poet and novelist writing in Chinese. Born in Liaoning province, she learned Chinese like all school-age children of her generation. (Her mother is also a poet but can write in Mongolian as well Chinese.) Su Xiaoyan has published two novels, two collections of essays and one collection of poems. Her novel was based on her experience as a drifting high school student in the capital city Beijing being forced to return to her hometown and being lost in between. Currently she is a graduate student at Beijing Normal University working on her master’s degree in Chinese literature with poet and scholar Zhang Qinghua.