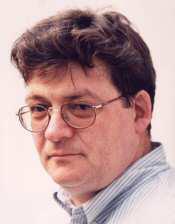 (United Kingdom of Great Britain and Northern Ireland, 1955)
Biography
John Burnside was born in Dunfermline, Fife, between the firths of Forth and Tay, in 1955. He lived in the English home counties and Gloucestershire before returning to Fife a few years ago. He studied English and European languages in Cambridge, and after working as a computer engineer became a fulltime writer; he also teaches at St Andrew’s University. He has won and been short-listed for several important prizes, including the TS Eliot Prize.
Because of his background in languages, Burnside is more aware of other poets from outside the Anglo-Saxon tradition, in particular those from Spain and France. The settings of his life absorb him, as does the ongoing search for what lies beneath the surface of the everyday world; he finds chinks through which he glimpses what is absent, what is wonderful or terrible, filtered through the senses of sight, sound and intuition.

Much of Burnside’s poetry is primarily set in the open air – he’s not a poet working from an urban study or bedroom; he is out walking and considering the landscape, or driving, at night as well as day, noticing close-up details. A poem from The Myth of the Twin illustrates this well:

The moonlight is suddenly large:
a brightness on the fields that only shows
when this house dims
and something clearer rises
through the parish I know by heart, bricks and glass, the dead immersed in stone,
subtle erasures, siftings of blood and bone,
as if this was the story of a place
that I could tell without impediment:
first thought, then form, a drift of native souls
scattered across the land like seed or snow,
ordered and lost; a sieve of consciousness
the making of this commonplace domain:
respected borders, marriages and births,
the giving up and taking on of names.

John Burnside knows how to include familiar everyday detail into a poem dealing with big philosophical, metaphysical or mystical subjects, mixing the parts into a seamless whole.

Two other ingredients infuse Burnside’s poetry. In the first volumes, the poems take a regular shape on the page. Few are rhymed, although he uses regular line lengths. But in The Asylum Dance, the lineation, and often the length of the poems undergo a change. Many lines have one word only, or a few, and the left-side lines are shifted well to the right, to leave plenty of space between lines and on the page, allowing single words more freedom and enhancing their metric music. These poems are seen to advantage on, for instance, an otherwise densely printed page of, for instance, The London Review of Books or The Times Literary Supplement, which regularly feature John Burnside’s poems.
© Anne Born
Bibliography

THE ARCHAEOLOGY OF CHILDHOOD 1: HOUSE