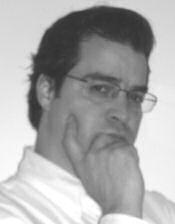 (Portugal, 1966)
Biography
Poet, essayist and a translator Rui Cóias is a graduate of the University of Coimbra and holds a postgraduate degree in Legal Sciences.

In Cóias' poetry, translator Richard Zenith writes:
the distinctions between time and space, and between the personal and impersonal, are blurred. It's all one vast territory through which the poet journeys, making useful or poignant connections, but without any presumption that he can make the world's order intelligible. That and other similarly heroic endeavors are impossible ('You'll never be able to complete / your quest'), which is not, however, a cause for despair. A small, modest happiness is always within our reach, or within our retreat, within us (see the poem 'What tiny, quivering impulse'), and we also, more rarely, encounter beauty ('You'll never be able to complete' and 'He said'). Beauty is what this modern style of classical poetry continually pursues.
Soon after the publication of A Função do Geógrafo (2000) [The Function of the Geographer] and A Ordem do Mundo (2006) [The Order of the World], Cóias earned public recognition. His third book, La Nature de La Vie [The Nature of Life], is a bilingual Portuguese/French  edition published in 2014 by Orfeu, Librarie Portugaise et Galicienne which debuted at the Transpoesie Festival in Brussels. In 2015, L ‘Ordre du Monde [The World`s Order] came out in France in a bilingual edition by L’ Harmattan.

Europa [Europe], his latest book, was published in 2016. Among other texts, it contains a series of poems about the Great War in France, in 1916. For this project, Cóias received a fellowship from the French Ministry of Culture & Communication.

About Europa, Hugo Pinto dos Santos adds:
Rui Cóias' new book is an extensive reflection about the concept and the limits of Europe. The stigmatization of time is one of the ways that Europe has found to express the exhaustion it conceives for the physical and symbolic space of the continent. In its predominantly hieratic imagery, served by a slow, recitative, baroque-inspired rhythm, Europe dramatizes time, transforming it into a character of the continent's tragedy.

And, according to Portuguese literary critic António Cabrita:
(…) it is worth remembering one of the books that most impressed me in the last five years, Europa, by Rui Cóias. I use a word that the author uses in a poem – altarpiece – to describe this book. Europa is an altarpiece that, due to its density, does not allow us to have an immediate overview, but which gradually reveals itself, panel by panel, as a morning fog that slowly scatters until the final splendor. It is a meditative poetry based on a strong verbal precision, having the enormous quality of enlightening unexpected nuances at each reading.

Cóias was one of the authors invited by the Portuguese literary committee to FIL Guadalajara (Mexico), in 2018, when Portugal served as the festival's Guest of Honor, where he presented Las Márgenes Sombrias [The Shady Margins] a bilingual edition by El Errante. His work has also been translated into Dutch, and published in 2018, by Vleugels as Laat de Stilte [Let the silence].

Poems from the Portuguese
Transpoesie, Brussels
Rui Cóias on Lyrikline

If you want me to get lost

Nothing exists that hasn’t had a beginning.

It’s not hard for a man to fall in love

Finally you say – in what’s obviously a discourse, my friend