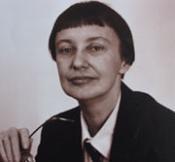 (Ukraine, 1954)
Biography
Western readers, Dutch, in particular, are well acquainted with the poetry of the Ukrainian poet Natalka Bilotserkivets\'. Foreign translators\' empathic attention to her works resulted in numerous publications in English-language anthologies and magazines in the USA and Western Europe.
Bilotserkivets\' was born in 1954 and holds a degree in Ukrainian literature from Kyiv University. Her poetical universe was formed under the influence of French symbolism and Russian acmeism, thus for the Western reader there are no cultural barriers which often impede the adequate translation of Ukrainian poetry into foreign languages.

Her first poetry book Ballad about the Invincibles was published in 1976, while she was still a student. The collections of poems The Underground Fire (1984) and November (1989) became real hallmarks of Ukrainian poetical life of 1980\'s. Her meticulous, refined lyrics became a serious competitor to the powerful male poetry of the generation of 1980\'s. For the entire younger generation of the post-Chornobyl Ukraine her poem "We Will Not Die in Paris" served as a kind of prayer. Her name is often associated with it, though she also wrote a lot of other great poems.

Bilotserkivets\' last book Allergy (1999) is considered to be her real poetical acme (hopefully not the last one). The translations for this rendezvous with Natalka Bilotserkivets were prepared by American translators Michael M. Naydan and Olena Jennings.
© Andriy Bondar (Translated by Kateryna Botanova)
Publications
Ballad about the Invincibles (poems, 1976);
The Underground Fire (poems, 1984);
November (poems, 1989);
Allergy (poems, 1999).

CINEMA OF THE SAMURAI