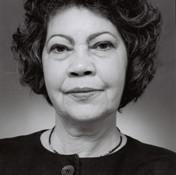 (Jamaica, 1943)
© Pieter Vandermeer
Biography
Olive Senior worked in journalism in Jamaica and Canada, and lives alternately in both countries. She spends much of her time giving readings and conducting workshops internationally. She has been writer in residence or visiting international writer at Universities in Canada, the West Indies, Britain and the United States.
Her work has been broadcast in Canada, Britain and the Caribbean and she is represented in numerous anthologies.

Olive Senior has published two books of poetry: Talking of Trees (1986) and Gardening in the Tropics (1994). She is the author of three collections of short stories: Summer Lightning (1986) which won the Commonwealth Writers Prize in 1987, Arrival of the Snake-Woman (1989) and Discerner of Hearts (1995) and of several non-fiction works on Caribbean culture, including: A-Z of Jamaican Heritage (1984) and Working Miracles: Women\'s Lives in the English-Speaking Caribbean (1991).

Although Olive Senior now spends half of her time in Canada, it is the flavour of the Caribbean which pervades her poetry. She writes from a broad perspective, having worked as a journalist in both Jamaica and Canada, and as an author of short stories and non-fictional prose works. There is in her poems a subdued evocation of the ordinary, the familiar and the homely. Her tone is conversational, the effects are secretive and fleeting like the gold of macca and \'the weeds which mark our [the original inhabitants of Jamaica\'s] passing\'. The critic Michael Dash, reviewing Gardening in the Tropics, suggests a kinship with Jean Rhys and Elizabeth Bishop. \'With Rhys she shares a feeling of doubt regarding the craft of writing, which is never thought worthy.\' And with regard to Bishop, \'… we sense a similar unflappable poise … even when dealing with the most disturbing subjects.\' While writing about the turbulent Tropics, Olive Senior displays a clarity and quiet sanity that can come from distance and solitude. She deals with moral issues, with the environmental crisis brought on by single-crop agriculture, and deforestation, but she handles her subjects with subtle irony and humour and her tone is always relaxed. Even when addressing Jamaica\'s old colonizers, as in \'Meditation on Yellow\':

perhaps as you sip your tea
at three in the afternoon
a bit incontinent
despite your vast holdings
(though I was gratified to note
that despite the difference in our skins
our piss was exactly the same shade of yellow).
© Ko Kooman
[Olive Senior took part in the Poetry International Festival Rotterdam 1999. This text was written on that occasion.]

The birth of islands