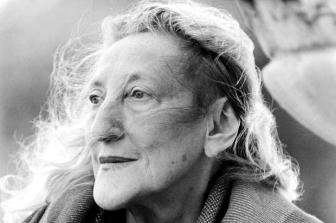 (Romania, 1924 - 2014)
Biography
Nina Cassian went to the United States as a visiting professor in 1985, determined to return to Romania despite the difficult situation there. In her own words: 'A poet never leaves his country, his native soil, his language, of his own free will.' However, when the Romanian secret service, the Securitate, arrested a friend of hers for keeping a diary which also included satirical poems by Nina Cassian, she knew she could not go back.
If she was to go on writing poetry, she would have to learn to write in a foreign language, even though she was over sixty. After her forced emigration she was banned from Romania's literary annals until the collapse of the Ceausescu dictatorship.

Nina Cassian (born Renée Annie Cassian, Stefanescu by marriage) is an artist of remarkable versatility. Apart from writing poetry she has written children's books and made her name as a translator. She also studied painting and composed music. Due to the political conditions in her country her career as a poet has not been an easy one. After the publication in 1947 of her rather surrealistic début collection La Scara 1/1 (Scale 1:1) she came under attack for writing poetry that went against the spirit of Soviet-dominated Romania. Under pressure from the authorities she wrote agitprop poetry for several years, but gradually returned to her true calling. She published a series of poetry collections which brought her to the forefront of Romanian literature. After being granted political asylum in the United States she begun publishing poems in translation, including some of her own, and in 1998 produced her first collection of poems written directly in English, TAKE MY WORD FOR IT, the latest addition to an oeuvre comprising more than fifty books.
© Jan Willem Bos (Translated by Ko Kooman)

[Nina Cassian took part in the Poetry International Festival Rotterdam 1999. This text was written on that occasion.]

AND WHEN SUMMER COMES TO AN END

AND WHEN SUMMER COMES TO AN END