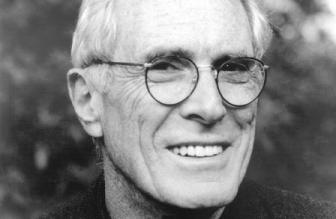 (United States of America, 1934 - 2014)
© Poetry Foundation
Biography
Mark Strand was born on Prince Edward Island, Canada, and raised and educated in the United States and South America. All his life he has created the impression of being a Sunday’s child. His work has been praised from the very beginning, he has won many prizes, including the 1999 Pulitzer Prize for his collection Blizzard of One, and much personal recognition, not least by his election as America’s Poet Laureate in 1990.
The Sunday Child feeling is there in many poems, especially in the earlier ones, where images from childhood en recollections of a close and harmonious family union are strong.

A happy childhood does not preclude a serious outlook on life. For Strand, death is the central concern of lyrical poetry, which, he says, tells us that we are mortal. Even when the poem is in a festive mood, it reminds us that the party itself is over. For him the awareness of death is a contemplation of Nothingness and Oblivion is all shapes and gradations. Hades he sees as the most poetic place in his universe. Endless absence, ‘the height of inactivity’, he considers to be his main source of inspiration, as it embodies ‘the original of sleep and life’s end’. In his work we find all sorts of passive forms in language and life, together with a kind of melancholy which does not reject life but places it in dead, almost surreal interiors, or by contrast, in a vast landscape perspective. His style, despite an abrupt caesura in the 1980s, followed by an increase in complexity, has never really changed. Verbs like rise, fall, wave, sleep, float, sink, lie, shine, disappear, or nouns like mirror (implying absolute stillness), or the curious linking of water and sleep in ‘watersleep’ – all such words fit the passive mood of his poetry. Still, Strand’s poetic characters seem remarkably untroubled by the unmistakable melancholy that surrounds them. This melancholy, while creating the necessary distance, appears as something to be secretly enjoyed.

The landscape perspective is expressed in the context of a longing for security and ‘the waters of childhood’. Trees, rivers and lakes do play a role here, but not as compellingly as the coastal regions of Eastern Canada and New England, with their particular architecture and atmosphere. The poem about ‘the waters of childhood’ published on this site, is a fine case in point.
© H.C. ten Berge (Translated by Ko Kooman)
Mark Strand took part in the Poetry International Festival Rotterdam 2001. This text was written for that occasion.

OLD MAN LEAVES PARTY OUR MASTERPIECE IS THE PRIVATE LIFE THE VIEW WHERE ARE THE WATERS OF CHILDHOOD?

OUR MASTERPIECE IS THE PRIVATE LIFE

Where are the waters of childhood?