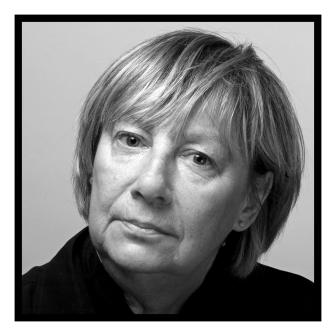 (Poland, 1945)
© Tineke de Lange
Biography
Ewa Lipska is one of the most important Polish poets of her generation. She studied painting at the Academy for Fine Arts in Krakow, and from 1970 to 1980 she worked as an editor at the Krakow publishing house Wydawnictwo Literackie. In the 1990s she lived for seven years in Vienna, where she was assistant manager of the Polish Cultural Foundation.
She debuted as a poet in 1967 with the collection Wiersze (Poems), and from then until 1978 she published four more collections, from Drugi zbior wierszy (The Second Poetry Collection) up to Piaty zbior wierszy (The Fifth Poetry Collection). She has now published more than twenty poetry collections and several anthologies. Her most recent poetry collection Pomarańca Newtona (Newton’s Orange) was published in 2007, and her first novel, Sefer, in 2009.

Lipska’s work has been awarded various literary prizes and her books have been translated into fifteen languages, including English, German, French, Spanish, Swedish and Hebrew. Two of her collections have appeared in the Netherlands: Mensen voor beginners (Human Beginners) (De Geus, 2000) and Splinter (De Geus, 2007).

Although Lipska is sometimes considered as part of the “New Wave” group of the 1970s, she distances herself from such associations, preferring to operate autonomously. Over the years, her mistrust of the language of her daily surroundings, for her a language of masks and lies, has grown. In response, Lipska has developed an inverted language, which is confrontational and frequently ominous. Her poems are lucid, and in few words, she puts forth her own reality with gentle irony. Fascinated by human behaviour, she strips away the false meaning of words, proving that we’re still merely “Human Beginners”.
© Ad van Rijsewijk (Translated by Michele Hutchison)
Ewa Lipska was invited at the 41st Poetry International Festival. This text was written for that occasion. For more information, including a festival schedule, visit www.poetry.nl.