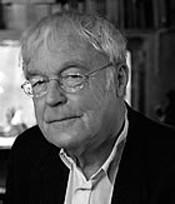 (The Netherlands, 1934 - 2012)
Biography
Rutger Kopland is convinced that scientific research is fundamentally no different to the process of writing a poem. “Like Leonardo,” as Noble Prize Winner J.M. Coetzee puts it in his ‘foreword’ to Kopland’s Memories of the Unknown, “Kopland is an artist who does not regard the world-view of the scientist as inherently shallow or misguided.” Perhaps it’s this similarity that made Coetzee chose Kopland as one of the six poets brought together in his anthology Landscape with Rowers: Poetry from the Netherlands.
The poet Kopland made his debut in 1966 and has published over fifteen volumes of poetry, three essay collections and a collection of travel and translation notes. He has won numerous prizes for his poetry, including the prestigious VSB Poetry Prize 1998 and the P.C. Hooft Prize 1988, one of the Dutch-speaking world’s most important literary awards. Kopland ranks high as one of the Netherlands’ best-loved poets. He speaks to his readers in a quiet, conversational style, using ostensibly simple phrases. His poems seem to evoke a wistful, almost nostalgic atmosphere of a lost paradise, happiness beneath an apple tree or in the grass, Among the Cattle, to quote the title of his 1966 debut volume. Kopland addressed the issue in a series of notes from his diaries that were added as an appendix to one of his volumes: “Everyone finds a lost paradise in my poetry, a longing for it. I don’t long for the past, I long for experience (...) and experience is new, now.” These diaries also reveal that Kopland has long wrestled with the problem that the obvious words for the proverbial ‘major emotions’ have a steamroller effect, flattening everything before them. Those words might have been worth something in a world that was still whole, but that world no longer exists for Kopland, neither does he long for its return.

Kopland’s poetry is constantly balancing on the borderline between language and what it evokes. Irony is a common device in his early work and he is a master at using subtle exaggeration to steer a path between cliches. He once elegantly described the clash between his nostalgic tone and the far-from-nostalgic meaning of his poems as “memories of the unknown”. Through creation, through writing and slashing, something completely new emerges and turns out to be a memory: the memory of what and who you always were, irrespective of all the ideas you’ve always had about yourself: a stranger, someone else, an emptiness, “a hole in the form of / a man in the landscape.”

In his later volumes, from the eighties onwards, Kopland’s poetry seems to have become more philosophical. He wrote a series entitled ‘Die Kunst der Fuge’ in which a non-specified ‘it’ wanders, merges, dissolves, disappears, “and it went on, as if there was always something else / that has to be sought, found, lost, sought, / as if there was always something, something that has to be / before it disappears and after.” The poems seem to provide the basic pattern for the kind of movement Kopland makes in all his poetry. They demonstrate the ‘mechanics of emotion’. The continuing presence of these mechanics in his latest volumes guarantees that Kopland is still a poet whose work evokes the response: yes, that’s it exactly! – and that feeling is immediately reassuring, almost comforting. But what it exactly is is rather disturbing: the ‘now’ in which you are who you are is already over, a memory, the essential unknown, intangible.

“One wonders how long it will take the Nobel Prize committee to consider Rutger Kopland, clearly an exceptionally gifted poet, and a very proper focus for their liberations.”
Poetry Nation Review

“The quality of his lyrics and elegies, alpha and omega of the poet’s trade, indicate a warm and intelligent man who tackles the big subjects with economy and tact.”
The Independent

postcard from a greek island