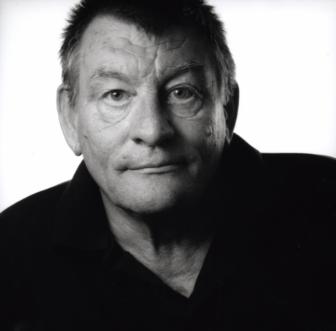 (The Netherlands, 1937 - 2012)
© Tineke de Lange
Biography
J. Bernlef has made his mark in just about every literary genre under the sun. He published his first collection of poems, Kokkels (Cockles) in 1960, and some twenty collections later was honoured with the prestigious P.C. Hooft poetry prize.
Besides poetry he has written short stories, novels, plays, and essays about literature, art and music – especially jazz, as in his latest book Will Jazz survive in the 21st Century? He has also translated work from favourite contemporaries and predecessors, e.g. Elisabeth Bishop, Marianne Moore and several Swedish poets, e.g. Tomas Tranströmer and Lars Gustafsson.

With K. Schippers and G. Brands he started the magazine Barbarber in 1958, in which he experimented with Dadaist and surrealist-inspired texts: ready-mades, language taken from all areas of real life. In the 1970s his work lost much of its conceptual and ironic character, becoming more personal and poetic in spirit. Bernlef was not a lyricist, his language was clear rather than passionate; it was no accident that he felt attracted to the land and the literature of the European far north.

Bernlef’s poems express the wonder of an outsider, a passer-by. He looked for that which is unfinished and uncertain, for possibilities rather than facts, for temporariness rather than eternity. In his story collection Cellojaren (Cello Years, 1996) he quoted a painter as saying: ‘It is the eye which sets the measure, the wandering gaze which catches now this, then that. You may be watching the same thing, but never in the same manner.’ It is a statement which seems to catch the essence of his poetry: the observations of a wandering eye.

Bernlef was an avid onlooker; his poems abound in concrete images and scenes from daily life, but he often used words like ‘vanish’, ‘forget’ and ‘absence’. Man’s perception is poor, and so is his memory. The poet who, in detached wonder, tries to give form to what happens before his eyes, will always be wavering on the borderline between what is and what is not. What is, he cannot see any longer; what is not, he cannot yet see.
© Mirjam van Hengel (Translated by Ko Kooman)

[J. Bernlef took part in the Poetry International Festival Rotterdam a total of seven times, the last of which was in 2000. This text was written on that occasion and adjusted in 2012 following his passing]

out of sight out of mind

View of the future

This is the world

The museum of childhood

mindful of the licentious rake