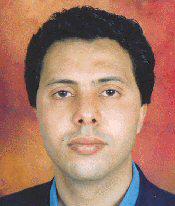 (Morocco, 1969)
Biography
Mohamed Bachkar was born in 1969 in Rabat, Morocco. He is a poet, writer, and journalist. As a matter of fact, because of the interesting weekly column he writes in al-Alam newspaper, many readers first came to know him as a young gifted journalist. His journalistic style is a unique combination of commentary, wit, and poetry.
When Bachkar published his first poems he astonished many of his friends and colleagues by his mastery of poetic language, and original vision as far as poetic experience is concerned. Those first poems revealed a young soul enamoured by the beauty and mystery of language. Moroccan critic Najib Elaoufi wrote that Bachkar “approaches poetry as a special agnostic and mystical realm, as a case of mysterious attraction and rapture, hence the strange language he often uses”. We can add to this the erotic aspect which also dominates his vision, and which shows a kinship with the experience of the Egyptian poet Ahmed Shahawi.

Mohamed Bachkar published two books of poetry, Mamaika fi Masahhat al-Jahim (Tangier 1999), and Khabtu Tair (Casablanca 2002). He is a member of both the union of Moroccan Writers and the House of Poetry in Morocco. He participated in many poetry festivals, and remains highly optimistic about the life-changing role of poetry.
© Norddine Zouitni

Sleeping as in a cavern

The verge of annihilation

Drunkenness Mounting the stairs of grapes