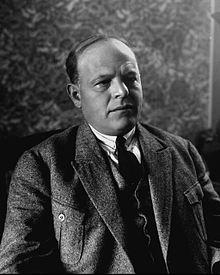 (Ukraine, 1873)
© Wikipedia
Biography
Chaim Nachman Bialik combined in a unique way his personal wish for love and understanding with his people’s desire for a homeland.
Chaim Nachman Bialik was born in Radi, the Ukraine on January 9, 1873, and died in Vienna, Austria on July 4, 1934, following surgery. Fatherless at the age of seven, Bialik received an Orthodox Jewish education. In his youth he studied at the Volozhin Yeshiva in Belarus, while leaning toward the enlightenment movement, an attraction that led him to move to Odessa at the age of eighteen. There he devoted himself to studying Russian and German, and the reading of secular literature. Two years later he married, working for a living as a Hebrew teacher, and a coal dealer, for a decade.

In 1901 Bialik’s first book of poems was published in Warsaw, where he lived from 1903-1905, editing the journal Shiloah, and later founding the Moriah publishing house for classic Hebrew textbooks. In 1904 and 1908 he visited Palestine. Throughout these years Bialik turned increasingly to writing and translating, publishing in Hebrew works from the European literary canon: the poetry of Heine, Schiller’s Wilhelm Tell, Shakespeare’s Julius Caesar, and Cervantes’ Don Quixote. In 1921 he founded the Dvir publishing house in Berlin and moved to Tel Aviv three years later, where he occupied himself with cultural activities and other public works.

Ever since that time, to this very day, Bialik has been considered the foremost modern Hebrew poet. His poetic oeuvre is small, but broad in its themes: Bialik often depicted the suffering of his people, but to his contemporary readers he offered mainly a direct approach to doubt, desire and the isolation of human existence. In contrast to his lyric and epic poetry, his stories excel at their movingly realistic descriptions, often touched with humor, and characterized by their author’s rich imagination, and a blend of joy in the every day with the sorrows of life.
© Rami Saari
Also on this site
Bialik: caught in a world whose God is dead
Translator Ruth Nevo on Bialik.
On Bialik’s ‘Return’: where to and what for?
PIW editor Rami Saari on Bialik.

Links
In Catalan
Revista
An article by Moshe Nahir about the development of modern Hebrew with a reference to Bialik (chapter 3.3).

In Dutch
Wikipedia
A biographical note.

In Hebrew
Ben Yehuda
An exhaustive web-site with Bialik’s poetry and prose.

In Ukrainian
Uazone
A translation of one of Bialik’s poems.

On a Summer’s Day

Take Me Under Your Wing

I Didn’t Win Light in a Windfall