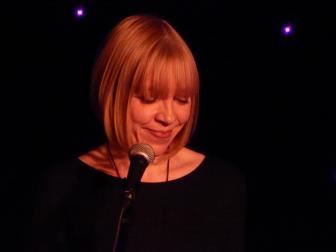 (United Kingdom of Great Britain and Northern Ireland, 1967)
© Anna Terek
Biography
Zoë Skoulding is a poet based in Bangor, North Wales, whose practice encompasses translation, literary criticism, editing, teaching creative writing, academic research and curation of international poetry projects. She has five collections of poetry to her name, as well as numerous other publications related to her research and the international poetry projects she has initiated. She is Professor of Poetry and Creative Writing at Bangor University, where she ran the network Poetry in Expanded Translation (funded by the Arts and Humanities Research Council) 2017-2018. From 2009 to 2011 she was, in partnership with Literature Across Frontiers, director of Metropoetica, a collaborative project on translation, gender and city space. She was Editor of the international quarterly Poetry Wales 2008-2014 and co-directed the (North) Wales International Poetry Festival 2012-17.
Her collection Footnotes to Water which won the 2020 Wales Book of the year for poetry in English, confirmed her place as a leading poet who draws on her encounters with other cultures, histories and languages in examining and interpreting urban and natural environments contemplating the impact of human presence on nature and the ways in which nature is present in man-built environment. Walking is often her way of approaching her subject, and the collection made of three parts, each of which had a different genesis, but all three emerged from walks – collaboration with an artist and a musician, a commissioned series of poems, and poetry written during a residency in Paris several years ago.  The middle part, focused on sheep – a Welsh topic par excellence – spans the distance (or proximity) between poems inspired by two rivers, one in France and one in Wales.

The two waterways are Bièvre, a lost Parisian stream that once ran through streets of tanneries and past the Gobelins tapestry factory, and Afon Adda in Bangor, both submerged underfoot and discovered during walks and conversations in which the interlocutors may be the poet’s companions, writers of the past, the city itself or the sound of invisible running water polluted by industry and human refuse, so that the only way to describe it is to list what it is not and what it refuses to be.

Not water now but ink
the river’s leaking black
staining my hand in this
blotting out of image
its refusal to be
anything but body
touching its own absence
blind in concrete channels.

A translator and an editor, Skoulding is apt at crossing cultural and linguistic boundaries, adapting diverse poetic forms and bringing the threads connecting her observations of two very different locations together: “The importance of language is demonstrated in a preoccupation with the musical etymology of plants, rivers, and place names, with quotations and Welsh phrases threaded through the poetry… As a translator, it is fitting that Skoulding asks the reader to translate too, though some of its charm lies in not being understood”*:

Crwydryn y ddinas yn cario’i gwastraff. Half way down the river you start to hear the flow of the water above the drain covers. I can feel the pull of the water here, tuning into it like radio. I’r pant y rhed y dwˆr. How many times a day do you cross the Adda? A damp corner of the room, the creeping bloom across the wall, the opening crack: read the signs. Mae llifogydd yn bygwth y tyˆ. hwn. Water sleeps in every mirror. It pulses under our feet, beneath car tyres, beneath sheds.

Zoë Skoulding is one of the best travelled poets of Wales and is known to audiences in a number of countries where she has performed at festivals and literary gatherings, and she is always generous with what she brings back: the influences on her writing, translations and the many contacts leading to collaborations and projects she curates, that grow almost organically one from another. In 2008 she published an extension of her collection Remains of A Future City combining original text, translations, recordings and photographs in a booklet with design reminiscent of futurist publications and posters of the pre-war era, entitled You Will Live in Your Own Cathedral. The publication, accompanied by a CD and created together with her musician husband Alan Holmes using soundscapes and recordings of voices, and black and white photographs from her home town Bangor, Berlin and Prague, makes oblique references to the two continental cities that led the interwar artistic and architectural avant-garde with visions of social utopia expressed through urbanism and planned housing, only to become caught up in the post war division of Europe and silenced for decades to come, as if the bold structures of the time already contained seeds of the ruin of their own ideology. At the same time buildings are also living organisms, at one with their surroundings, simultaneously growing and prone to decay, their structures containing a blueprint for the inevitable collapse:

Hard to say whether this is
destruction or creation

into true, the core straight
above its foundation –

a split second of balance
before the fuse lit in a place
that used to be the future.

Metropoetica, a project which brought together seven women poets from across Europe to collectively discover the ways in which women occupy urban spaces and create alternative maps through their presence, was again based on the connection between walking as a way of exploring different physical and cultural environments, writing poetry and translating, so important to Skoulding’s work. The project resulted in a series of multimedia performances and in a book of the same name:

as fuelled cloth thickens under
the foot scouring wool matted

to a waulking song
where generations have trod, have trod

Skoulding’s attention to sound and use of technology to create soundscapes gives resonance to her performances and cross-cultural collaborations with other poets and translators, as in the Poetry Connections project, organised by Literature Across Frontiers in India in 2010, which brought together European and Indian poets writing in a range of languages to create a multilingual performance interweaving the original poems with translations into a tapestry of sound.

She has also participated in various other collaborative international poetry projects such as Gelynion / Enemies or Camaradefest curated by the London-based poet S J Fowler. Her collaborative residency with the Algerian francophone poet Samira Negrouche, resulted in an undocumented performance at the Ledbury Poetry Festival and the Mosaic Rooms in London. And it is this ephemeral nature of some of her collaborations that places her work in the realm of a one-off performance and sound installation art, giving it an added dimension.


*Thomasin Collins in Dundee University Review of the Arts.

Her poetry in anthologies