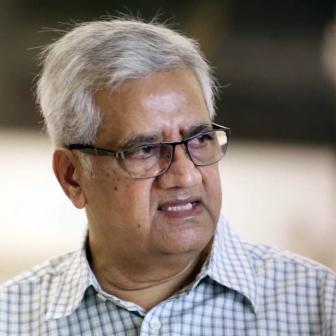 (India, 1950)
Biography
Kamal Vora is the award-winning author of three books of poetry in Gujarati. An electrical engineer and a management graduate, he works in a family business in the field of pharmaceutical distribution in Mumbai. Translated into Hindi, Marathi, Bengali, Kannada and English, Vora’s work has been published in various national and international journals. He has for the past decade been co-editor (with Naushil Mehta and Kirit Dudhat) of the prestigious quarterly journal, Etad, founded by the well-known Gujarati literator, Suresh Joshi.
Vora’s first book, Arav, published in 1991, won the Umashankar Joshi Award. His second book, AnekEk, published in 2012, won the Gujarat Sahitya Akademi award in 2012, and the Central Sahitya Akademi award in 2016. His book, Vruddhashatak (2015) was awarded the first prize of the Maharashtra Rajya Gujarati Sahitya Akademi in 2016. (The poems in this edition are drawn from this collection.) In 2017, he co-edited, with Pravin Pandya, Aadhunik Bharatiya Kavita (published by the Sahitya Akademi, Delhi), an anthology of Gujarati verse from 1950 to 2010. He has two volumes of poetry ready for publication.

The poems in this edition present a fresh and strikingly memorable portrait gallery of old men. An interesting strategy in these poems is the poet’s refusal to give us backstories – names, biographies, physical descriptions, the welter of detail that turns types into individuals. Instead, the figures in these poems are choreographed in what seems like a spare and starkly elemental piece of dance theatre, their movements performed with a slow, hypnotic repetitiousness. And yet, the poet is able to suggest deep pathos in the lives of the figures he conjures. It is an adroit poetic manoeuvre: this use of broad strokes without any loss of poignancy. The cumulative impact is a compelling statement about ageing—its invisibility, its attendant indignity, its inevitability.

Indeed the power of these poems lies in all that they leave unsaid. What sharpens the irony is the fact that Vora chooses, on occasion, to view these figures the way the world would: as shadowy, anonymous, undifferentiated. The old men are not just archetypes—timeless figures standing on the cusp of extinction. They are also, at times, deliberately crafted stereotypes, prodding us into an acknowledgment of our own uneasy relationship with old age and death. In one sombrely minimalist poem, a group of faceless old men form a queue: “Like a dot on a blank sheet of paper/ an old man has been standing/ alone for a while./Another old man/comes and stands silently/ behind him.” The visuals of bleak uniformity have the quality of stylised masked drama. At the same time, they obliquely indict a culture of normalized indifference towards the aged, the routine marginalization of those who are seen as socially useless and economically unproductive.

Vora’s irony is gentle but unrelenting. The old man whose growl once made kids pee in their pants and the women of his household scuttle for cover is routed by a half-cough between one breath and the next. An old man shuffles slowly along a road to post a letter to his long-lost beloved, with no address on the envelope. Another old man absently counts falling leaves, but is distracted by a breeze, and forgets his count altogether. Still another old man decides he’s had a good day when he is able to bend a “long-forgotten frozen finger”.

In their deceptive simplicity, quiet understatement and unsentimental deadpanness, the poems in this tour-de-force collection leave us with searching questions—questions about human blindness to disquieting truths, about evanescence and the nature of time, about lives poised precariously between physicality and vapour.
© Arundhathi Subramaniam
Bibliography

No. 20 Like a dot on a blank sheet of paper No. 24 He was a he-man No. 5 His name and address forgotten No. 7 An old man sits counting leaves No.25 An old man shuffles to the post office
Poems
Poems of Kamal Vora

No. 5 His name and address forgotten

No.25 An old man shuffles to the post office

No. 18 The old man stands before the mirror

No. 13 The old men are happy today