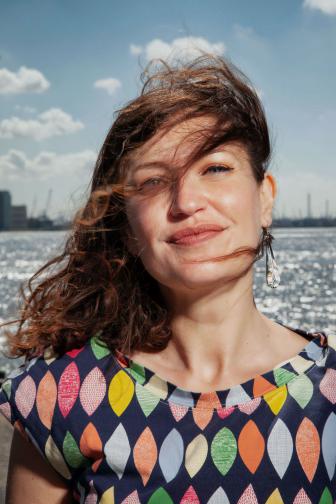 Erasures, evasions and the dialogue which bridges these are key to the poetics of poet and translator Juana Adcock. Frequently multilingual – working between English and Spanish, as well as occasionally Italian, Scots and Greek – her dreamlike texts often examine the violence of geopolitics and the gendered body but counter this with a fierce independence and a surprising sense of humour.

The child of a British father and a Mexican mother, Adcock was brought up bilingual, with her childhood and teenage years divided between the two countries. In 2007 she moved from Mexico to Glasgow, where she’s been based ever since, and in 2009 she completed a masters in Creative Writing at the University of Glasgow.

Adcock’s collection Manca, published in Mexico and written in Spanish and Spanglish, appeared in 2014 and was named as one of the best poetry books of the year by Reforma’s critic Sergio González Rodríguez. The collection is published in English by Argonáutica, translated by Robin Myers. In 2016 Adcock was named one of the Ten New Voices from Europe by Literature Across Frontiers, while her English-language debut, Split (Blue Diode Press), was a Poetry Book Society Winter Choice in 2019.

A commercial and literary translator as well as a poet, Adcock has translated some of the most daring authors working in English and Spanish today, including Gabriela Wiener, Diego Osorno and Giuseppe Caputo, as well as Helen Mort and the late Alexander Hutchinson. At its best, translation is for Adcock a collaborative and creative process; in 2015 she co-curated the experimental translation project One-Handed, taking poetry between English, Spanish and Scots through the work of literary translators, poets and Google Translate to create entirely new works.

Also a musician in two rock bands, The Raptors and Las Mitras, Adcock brings an innovative approach to the performance of her poetry, making use of live music and sound effects as well as creating multilingual sound installations. Her performances emphasise the presence of the voice, as well as the physicality of languages:

“I recently wrote a long love poem to the Scots language … The poem moves between different languages, in this case English, Scots, Spanish and Italian. Whilst performing it I become hyper aware of where the words sit in my body: I was already well familiar with the way Spanish booms in my chest while English thins out above my head, but I was amazed by how the Scots goes back down to my chest.”

This productive and artful approach to multilingualism carries through Adcock’s poetry, and she’s been described as one of today’s best literary practitioners of Spanglish. Her shifts between English and Spanish often stand in for moments of dislocation, while also encouraging the reader to work harder to interpret the text, as in this piece from Manca:

We are now number one in the world for the industry of kidnapping,
I read in the paper but I’ve fled
porque no quiero saber, I don’t want to hear,
me quiten all the number – Knowledge
can only take place within cierto radius.

The sense of conversation and of evasion which this interweaving of languages produces is key to Adcock’s work. Split starts with the sequence ‘The Serpent Dialogues’, a reflection on desire and discourse, in which dialogue is produced not only between an unnamed woman and snake, but also between the narrative proper and the poetic footnotes which interrupt the text. The epistolary ‘Letters to the Global South’, meanwhile, presents a one-sided, evasive conversation:

The tower blocks are lying empty now
their calcareous growth a negative cast
of the flesh that inhabited them.

What hermit crabs will use them as a
scavenged shell? Where do they hail from?


Circles and snakes recur across Split, whose poems range from the almost metaphysical, almost love poems of ‘The Serpent Dialogues’ through list poems to more explicitly political pieces such as ‘Juárez / Ecatepec’, which pays witness to Mexico’s high rate of femicides. While giving voice to the women and girls who have been killed, the piece also eerily acknowledges the extent to which the victims of violence have been silenced and anonymised:

I go round calling out for our
bodies in the house
of the dead:

Narrated by a young girl who has been killed – and who tells the tale of her death – ‘Juárez / Ecatepec’ unpicks conventions of the ghost story to interrogate very real political injustices. Such interweaving of moments and notions from remarkably different discourses is characteristic for this bold and startling writer.

LETTERS TO THE GLOBAL SOUTH

STORY OF STEEL AND THE LETTER M