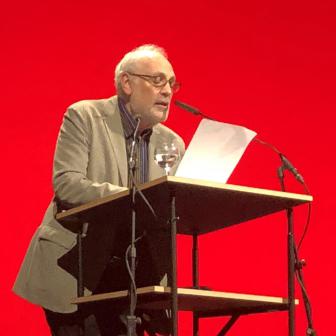 Resisting all norms – explicit norms, but especially also implicit ones – that is what characterizes the work of New York poet Charles Bernstein (1950), whether as a poet, theorist, polemicist, teacher, curator, or as a facilitator of conversations about poetry, which he has been conducting since 1978, when he cofounded the influential underground L=A=N=G=U=A=G=E journal with Bruce Andrews. Bernstein objects to the poetic laziness of what he calls “Official Verse Culture”; he opposes the suggestion of objectivity in cultural studies, the axiomatic in political language, and standard language itself. Instead, he pleads for the experimental and the proliferation of genres, styles, dialects, forms, and voices.

Bernstein’s poetry celebrates the exuberant wildness of language that breaks paradigms. His collections bring together the most variegated kinds of writing: unruly experiments, collected aphorisms, style exercises, parodies, translations, ready-mades, essays in the form of poems or vice versa, personal accounts – all to make the collections as polyphonic as possible. His notion of “echopoetics” labels the endless ecosystem of literary, philosophical, idiomatic, or pop-cultural references in his work, which rings with the distorted echoes of many different voices. This is as playful as it is serious: behind his eager use of absurdist puns often lurk furious political critiques, and his lively literary games can also reflect a personal or historical suffering.

Our United Fates, for instance, plays with the United States’ foundational myths, Bernstein questioning the unifying idea of the motto e pluribus unum through a plea for polyphony and processing the country’s past injustices. The Ballad Laid Bare By Its Devices (Even) was written for a Modern Language Association conference panel dedicated to the ballad. The poem is both essay and pastiche, full of sound- and wordplay, an ode to the versatility of this form. At the same time, the poem shows how this popular genre undermines Bernstein’s role as a poet in academia, calling for renewed solidarity in our neoliberal authoritarian age and for reinventing the collective, always pluralist voice of the ballad.

OUR UNITED FATES BALLAD LAID BARE BY ITS DEVICES (EVEN): A BACHELOR MACHINE FOR MLA

Ballad laid bare by its devices (Even): A bachelor machine for MLA