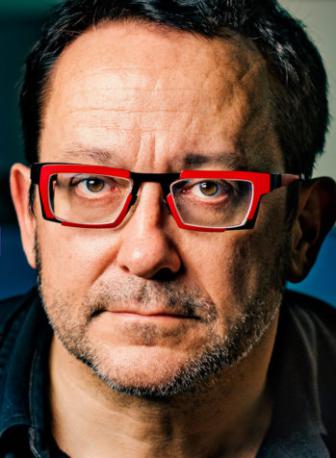 (Belgium, 1958)
© Arthur Los
Biography
Tom Lanoye is a prodigious and versatile writer who describes his work as “all forms of text and writing, for books, newspapers, magazines and other printed works, as well as for plays, stand-up comedy and vocal performances, in any form whatsoever and in the broadest sense of the word” (as noted in the articles of association of his corporation, L.A.N.O.Y.E., established in 1992). This wide-ranging approach has made him one of the most celebrated and frequently-read poets, novelists, polemicists, columnists and playwrights on the Flemish literary scene. Six of his novels have been successfully adapted for the screen, and his works for the stage have received international acclaim. In 2013 he was awarded the Constantijn Huygens Prize for his entire oeuvre. Lanoye has also adapted many books and other texts as theatre productions in which he plays the leading role. Performance is at the heart of his writing: “I consider performing to be a part of not only my being an author, but of being an author in general.”

In the late 1970s and early 1980s, a shift took place in Flanders: the oral performance of poetry was no longer seen merely as a fortunate by-product of writing, but achieved a high standard of professionalism and came to be seen as a goal in and of itself. Writers began to focus on writing poetry that was intended to be performed on the stage. In his student years and immediately following, Tom Lanoye went from one gig to the next, declaiming his self-published poems during now-legendary evenings. Some of these poems, such as ‘Neon! Een elegisch rockgedicht’ (‘Neon! An Elegiac Rock Poem’) and ‘Gent-Wevelgem’ (about an annual cycling race) acquired cult status during this time, before they were published in his official poetry debut, In de piste (In the Ring). But even on the printed page, the performance aspect of his poetry is preserved. The collection is structured after a circus performance culminating in a ‘Grand Finale’ with an abundance of rhetorical devices: hyperbole, parody, the combination of different registers and the absurd imagery make these poems funny, accessible and relatable. In Hanestaart (‘Cock-Tail’), on the other hand, Lanoye reveals himself to be, against his better judgment, a passionate romantic in search of love and authenticity.

Tom Lanoye’s texts for the stage are often adaptations and reworkings of well-known plays by Shakespeare, the great Russian playwrights or dramas from antiquity. Lanoye takes the same approach in the two volumes of poetry inspired by works first published during the First World War. Niemands Land (No Man’s Land) does not contain mere translations of the English war poets, but rather interpretations and recreations of their poems. In De overkant (The Other Side) he takes the same approach to war poetry by various European poets.

Between 2003 and 2005, Lanoye served as Poet Laureate of Antwerp, the first city in Belgium to appoint someone to that role. One of his projects during this time was a poem that was printed on a huge banner and hung from the KBC Tower (or the Farmer’s Tower, as it is known among locals), Europe’s first skyscraper. The poem is a declaration of love from this tower to the medieval tower of the Cathedral of Our Lady. The images of the red-and-black love letter on the facade of the 1932 building that circulated in the press soon became iconic. Later, Lanoye was also to pen a reply from the cathedral tower to the Farmer’s Tower.

Lanoye is the author of this year’s Poetry Gift, Vrij – Wij? (Free – We?). The publication is given to every reader who buys poetry books during Dutch Poetry Week, which commences on 31st January 2019. On the occasion of this prestigious assignment, a second edition of Tom Lanoye’s collected works, De meeste gedichten (Most Poems), appeared in January 2019.

The siren song of songs in the #me2 era

Confessions of a turnip plant (Or: `Autopsy of the self´)

The Absence of Hierarchies