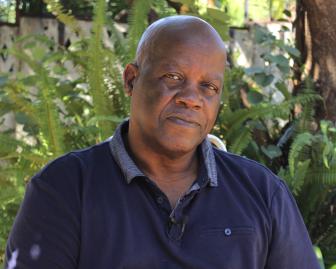 (Zimbabwe, 1949)
© Rumbi Katedza
Biography
David Mungoshi was born in 1949 in the city of Bulawayo, Zimbabwe. This made him a fluent speaker of three languages: Shona, Ndebele and English. As Mungoshi progressed in school, he also learned Zulu, for at that time Ndebele had not yet gained recognition as a language separate and distinct from it. Thus the future writer became acquainted with literature in several languages.

Mungoshi, who developed a keen sense for language, was fascinated by Ndebele praise poetry. He began to try his own hand at it when he came across ‘A God’s Error’, by the iconic Toby Tafirenyika Moyana, a mentor to many Zimbabwean writers and poets and became captive to poetry.

Mungoshi’s work has been appeared in a number of anthologies. Live like an Artist is his first solo collection. He is also a short story writer and novelist. A teacher most of his life, Mungoshi has taught at various levels and in various institutions in Zimbabwe, including the University of Zimbabwe. Retired, he currently lives in Gweru.
In an essay here on how he started to write after his retirement, Mungoshi says:

Many of the poems I wrote during this period...are narratives and descriptions of the incidents, thoughts and experiences that were an integral part of my life over many decades...Live Like an Artist is a personal, but honest appraisal of the lives of artists. It is about how artists flourish on hope and generally never give up.

Though the image I evoke in this sentence is probably anachronistic, in a metaphorical sense it is always as if the artist waits for the ship carrying his bounty of riches, to sail in.  For me, living one day at a time meant nursing very carefully the flickers of hope in my heart. It also meant enjoying the thrill of the chase as it were, the result, whatever it turned out to be, notwithstanding.

The poet may be seen reading his work in the videos that accompany their publication on PIW:
A POEM ABOUT TIME GOING BY
THIS RIVER

A POEM ABOUT TIME GOING BY