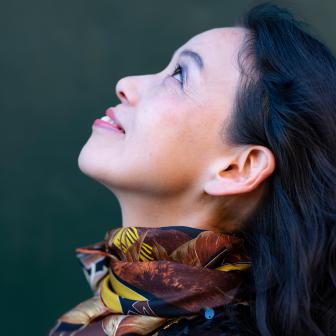 Celebrated Japanese poet Takako Arai replied to our invitation to Rotterdam with a poem about her frequent trips to small villages, where she sits on a bench and listens to the voices of old ladies. Everything is poetry to Arai. Her poems are playful, avant-garde and vibrant. They track sounds to their source, express how sounds are made in the body and give them names. In the enthralling anthology Factory Girls (2020) rhythmic, narrative poems reveal the harsh hidden world of women who work in the declining silk industry, bringing their emotional world to life and placing them in surreal situations: “Ghosts, people, factories, and creatures blow through each other like smoke rings (…) so vivid and vermicular, they all but crawl under the reader’s skin.”  (Japan Times)

Arai Takako was born in 1966 in Kiryū, a city in central Japan known for textile production.  Arai’s father is the manager of a small, cottage-style weaving factory located on the family property. At its height, the factory employed a few dozen people and produced some of the high quality, finely woven silks that earned an international reputation for the region. Many of Arai’s poems, including many poems in her second and third books in particular, focus on the lives of the women workers she saw so intimately while growing up seeing her father’s factory.  As Arai is quick to point out in her talks and essays, although women have been traditionally associated with weaving for centuries, women supplied the main source of labor in the textile industry since Japan started its rapid modernization in the mid-nineteenth century. It was also women who were most immediately affected by the collapse of the textile industry in the late twentieth and early twenty-first centuries as production was outsourced to developing nations.

Arai came to Tokyo for secondary education and graduated from Keiō University. She has published three books of poems to date: The Emperor’s Unfortunate Lover (Haō Bekki, 1997), Soul Dance (Tamashii dansu, 2007), and Beds and Looms (Betto to shokki, 2013). Some of the poems in her second collection, which won the Oguma Hideo Prize, appear in English translation by several translators in Four from Japan: Contemporary Poetry and Essays by Women (Litmus/Belladonna, 2006) and Soul Dance: Poems of Takako Arai (Mi’Te Press, 2008).  In addition, Jeffrey Angles has translated a number of her poems into English in the collection Poems of Hiromi Itō, Toshiko Hirata and Takako Arai (Vagabond Press, 2016).  Arai was one of the founders of the journal Shimensoka (1992-1995), and later of Mi’Te, a journal that she continues to edit even now and that has stretched to well over one hundred issues. She has served on the organizational board of the Tokyo International Poetry Festival, and she has a growing international reputation as one of the most exciting of Japan’s young generation of poets. Arai currently lives in Yokohama and teaches Japanese to international students at Saitama University.

Much of Arai’s work is avant-garde, incorporating experimental stylistic features such as the incorporation of dialect, radical juxtaposition of images, and the frequent use of sentence fragments. At the same time, however, her poems are often far more socially engaged than the work of many other poets in the world of contemporary Japanese poetry. She uses her poetry to keep the memory of the women workers she saw during her youth alive, even as the factories where they once worked are turning into vacant lots.  For instance, in the poem “When the Moon Rises,” she describes the ways that gestures learned while working in textile factories remain part of women’s lives, even long after the factories themselves have been closed down. Similarly in “Colored Glass,” she imagines the ways that the factory gets into the soul of an individual in even more literal terms—the poem describes a girl swallowing a silkworm so that her body literally becomes the factory where the silk is produced.  In “Beds and Looms,” the title poem from her third anthology, Arai describes the ways that the sexual lives of the women workers infiltrated life in the factory more generally.

Many of Arai’s poems about the lives of women in the weaving factories of her home in Gunma Prefecture contain representations of the workers’ dialect, thus giving direct expression to their woes and laments.  For instance, the poem “Colored Glass” presents a modified version of a children’s song, and “Beds and Looms” contains lines several passages rendered entirely in phonetic representations of the dialect of the town where Arai spent her childhood.  Capturing and representing the language of people she depicts represents an important method of inviting them to enter her work and voice their concerns as subjects. Perhaps it is no coincidence that when Arai reads her work in public, she does so with all the drama and presence of a professional actress, as if inviting the narrators of her poems to come inhabit her body while on stage.  (Arai has been greatly interested in the theater, particular the underground theater of the director Kara Jurō, about whom she has written extensively in her essays.)

Like many poets, Arai felt the call to respond through poetry to the 2011 earthquake, tsunami, and nuclear meltdown in northeastern Japan.  Her poem “Galapagos,” written soon after the disasters, is one of the rare poems that uses an element of humor to respond to the problems. In this poem, Arai takes many of the issues in the Japanese press in the year after the 2011 disasters and synthesized them into an organic whole—the ongoing anxiety about the Japanese economy during the ongoing nuclear crisis at Fukushima, concern about the extremely low national birthrate, and even the lack of individuality of Japanese youth as manifested in the almost universal tendency to wear clothes from Uniqlo. In fact, in the wake of so much bad news in 2011, Uniqlo’s entry into several new, major global markets in 2012 proved to be a ray of hope to the media, which seized upon it as a step forward for Japanese business and the economy. Given this publicity, it is perhaps no surprise that Arai singles out Uniqlo for particular attention.  The poem “Half a Pair of Shoes,” was inspired by a trip Arai made in the immediate aftermath of the 2011 disasters to Kesennuma, one of the coastal cities almost completely washed away by the tsunami. At the time of her visit, the shoes and clothing of the victims and other coastal inhabitants were still washing onto the shore. The sight of a single shoe lying on the shore becomes the starting point for this poem exploring what it means to be a poet attempting to reconstruct the stories of victims based on physical evidence alone.

Finally, the poem “Lots and Lots” was inspired by the commentary of several authors writing post-Fukushima about the ways that the Japanese population had become desensitized to the idea of atomic power, even though their experiences with atomic energy in Hiroshima and Nagasaki had been nothing short of nightmarish. She singles out the work of the manga artist Tezuka Osamu (1928-1989), whose wildly popular comic character “Iron-Armed Atom” (Tetsuwan Atomu) suggested to the Japanese population that nuclear power could be used for good. As Arai points out in the first stanza, the character’s name was changed to “Astro Boy” when the animated feature based on this comic was first exported to the United States. Throughout this poem, Arai uses Tezuka’s character “Atom” as a stand-in for the fifty-four nuclear stations located throughout Japan.  The final stanzas riff on three classic modern Japanese poems: Yoshioka Minoru’s “Monks” (Sōryo), Anzai Fuyue’s “Spring” (Haru), and Hagiwara Sakutarō’s “Bamboo and its Grief” (Take to sono aishō). By ironically and humorous rewriting these famous poems in ways that are relevant to the Fukushima meltdown, Arai shows the ways that the power of poetry—even poems already in existence—can be harnessed and rewritten to produce commentary in a time of crisis.

A RIVER’S TWISTS AND TURNS