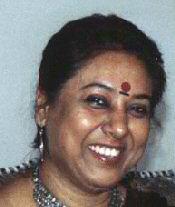 (India, 1960)
Biography
Mallika Sengupta is a proponent of an unapologetically political poetry and an important voice in contemporary Bengali literature. She began writing in 1981 and has since published eleven books of poetry, two novels and several essays, and edited an anthology of women’s poetry from Bengal. She works as a lecturer of sociology in a Kolkata college where she is currently the head of her department. She is also the Poetry Editor of Sananda, the Bengali women’s fortnightly (edited by Aparna Sen).
Sengupta has won numerous awards, including the Sukanto Puraskar (1998) from the Government of West Bengal, and a Junior Fellowship for Literature (1997 – 99) from the Department of Culture, Government of India. She has travelled to several poetry festivals, conferences and seminars in India, Sweden, Austria, USA and Bangladesh. English translations of her work have appeared in various anthologies. In addition to teaching, editing and writing, she has been actively involved with the cause of gender justice and other social issues. Along with other poets and artists, she has initiated Aloprithivi, a forum committed to raising consciousness among marginalized women and children through poetry, music and drama.

Sengupta has consistently refused to be squeamish about mixing her activism with her art. As she tells poet, critic and translator Sanjukta Dasgupta in the interview included in this edition, “Ideology ruins poetry, but not always. Rather every poet has to face this challenge at some period of her life… I think a good poet can always insert ideology into poetry without destroying aesthetic conditions.”

Dasgupta describes her as ‘an admirably alert, ardent and articulate person’ for whom feminism ‘is not just an academic issue’ but ‘a conviction and a challenge’. ‘In her poetry, womanhood does not remain an interiorised awareness,’ writes Dasgupta. ‘It becomes an energetic protest against marginalisation, interrogating women’s position in society as the oppressed other.’

In the poems included in this edition we hear the strong, unhesitant, unambiguous voice of a writer with a message. One begins to understand why Dasgupta describes the poet as the Taslima Nasrin of West Bengal. The polemics here are quite clearly the poetics.

It would be easy to dismiss this poetry as strident, shrill and ‘soapboxy’, particularly if one values an aesthetic paradigm of obliquity and subtext. However, it is useful to remind oneself of the perennially fraught but vital presence of protest poetry in the literatures of the world. And on reading this extract from Kathamanabi, a long poem by Sengupta (translated by Vaijayanti Gupta), one begins to see yet again why the raised voice must sometimes replace the genteel murmur:

“I am "her" voice, recounting her tales,
from the Vedic age to the 21st century.
The fire that has remained stifled in the ashes of history, smothered by time and age,
I am that woman - I speak of her.
I read tears, I write fire,
I live in infamy and consume its ashes.
I endure violence, and still breathe fire.
I live as long as this fire burns within me.
© Arundhathi Subramaniam
Also on this site:
{id="2687" title="Mallika Sengupta and the Poetry of Feminist Conviction"}
An interview by Sanjukta Dasgupta.

Star Magazine
‘Empowerment for peace, peace for empowerment’, an article on the ‘Bus for Peace’ that took thirty women from the Women’s Initiative for Peace in South Asia, including Sengupta, from Kolkata to Dhaka.