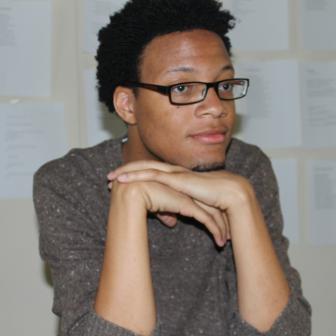 (United States of America, 1989)
© Javier J. Stevens
Biography
Rickey Laurentiis is the author of Boy with Thorn, selected by Terrance Hayes for the 2014 Cave Canem Poetry Prize. Hayes said of Laurentiis’s debut collection: “Whether in praise songs, appraisals, or meditations, the poems of Boy with Thorn embody an ardent grace. Their accomplished structures house a fearless sensitivity.” At the National Endowment for the Arts blog, Rebecca Gross said, “Laurentiis uses language as a balm and as a blade; his words are at once soothing and piercing, conspiratorial and confrontational.”
The duality of Laurentiis’s work is especially present in “I Saw I Dreamt Two Men,” as the speaker describes “Two men hoisted hung up not American the rope / Not closed on their breathing.” Duality is present in the seeing itself (“This was my eyes’ closed-eyed vision / This is what a darkness makes”) and further in the speaker’s experience of witnessing these bodies:

And how did I move from that distance to intimacy

The speaker exists simultaneously in two planes – “as if I was” and “because I became” – and the braided nature of the poem is pushed further when an intimate action (licking) is transformed as the speaker becomes fire.

Religion, sexuality, and blackness are themes that feature prominently in Laurentiis’s work. In “Black Gentleman”, a poem that begins with an epigraph from Robert Hayden, the speaker wrestles again with multiplicity of vision: “There are eyes, glasses even, but still he can’t see / what the world sees seeing him.” In his interview with Gross, Laurentiis said, “It’s true, the identity I claim and that has been claimed for me, like other identities, has been historically marginalized. But isn’t it also true that one often sees much better, clearer, sees more from the margins than they would if in the center?” Laurentiis’s speakers indeed see more, and what’s presented is a complex picture of the world we live in:


This is what I see: the Spanish moss
as convicted to its branches – gray, colonial,
but in my century now, suspended so close each vein might well be a whole,
hanging
fiction of my mind. The moss
is a fiction of my mind: a screen, swinging
on its gothic hinges, making the light fussier as it swags, giving not just the
trees
but my idea of them a Medusa look.
– From “Writing an Elegy”

Later in “Writing an Elegy” the speaker asks,

What is it
my mind wants to get at, always extending, hungering, looking
back, always tearing open again its own modernity,
as if each thought is more than the little present
moment it sounds like, but, raised at an angle, piercing me, having me imagine,
to build such antique violences in my head, it is a thorn?

Laurentiis’s work is clearly situated in the present moment but understands how deeply rooted our present is in the “antique violences” of the past. Some of the most beautiful moments in Laurentiis’s poems, though, are when he pushes beyond our reality into something entirely mythic:


In another version, the woman dies
and her husband
braids her hair
through the trees.
– From “Writing an Elegy”

Speaking about his attraction to visual art in an interview for the Kenyon Review blog, Laurentiis said:


I sometimes think that, because of my relationship with persona poetry, I’ve come to think of ekphrasis as a substitute. At least if I assume the voice of a painting or sculpture, for example, the nature of the medium already expresses some sort of idea of constructiveness, of fabrication and manipulation. Any notion of “authenticity” or of reaching or claiming it isn’t so much lost, as it’s beyond the point. All of this seems to offer me license to really begin to imagine, which is all I ever want to do.

Laurentiis has received fellowships and scholarships from the Civitella Ranieri Foundation, the National Endowment for the Arts, the Poetry Foundation, the Atlantic Center for the Arts, the Bread Loaf Writers’ Conference, the Cave Canem Foundation, and the Virginia Center for the Creative Arts. Buzzfeed named him one of 31 contemporary poets to read. His work has been commissioned by the International Art Exhibition and Prospect.3 New Orleans. He was born and raised in New Orleans, Louisiana, and now lives in Brooklyn, New York.
© PoetryFoundation.org
Bibliography

I Saw I Dreamt Two Men