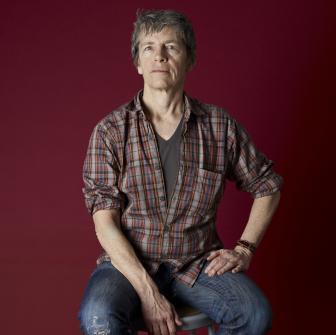 (United States of America, 1949)
© Catherine Opie
Biography
Eileen Myles is the author of more than a dozen books of poetry, fiction, and nonfiction. Publisher’s Weekly has described her work as “conversational yet exact . . . with seemingly effortless wit and tenderness.” Briane Teare, writing for the Los Angeles Review of Books, noted her “genius ear for the tones and syntax of the American vernacular,” and her “Schuyler-esque lines amped up with a feminist, queer, working class politics.” Teare described her latest work, Snowflake / different streets, as “a double volume that confirms and completes her shift from her earlier voice-driven poetics to a more concept-driven texuality . . . her lyrics have increasingly risked abstraction even as they’ve continued to explore autobiographical and cultural experience.”
Myles’s concept-driven focus is scene in new poems, such as in “Dream”:

Close to the
door in
my dream the
small signs

It’s hard to imagine what a sign, “with wisdom / on it,” might look like, but Myles’s characteristically plain language and short, punctuationless lines allow us to move quickly to the concrete image of her mother “leaning over a pond / cupping water.”

The concept of wisdom carries us further into the poem, asking “which materials do you // does your wisdom prefer.” It’s not entirely clear how wisdom functions here, though the “you” of the poem is conflated with wisdom in these lines, and thus wisdom itself may be a person, or, perhaps, a dream-like rendering of a person. Myles then pushes us directly and firmly into waking reality:


which a-
partment in a summer
with someone
I felt brave to
have touched
her love the screen
door and the dogs
and the cats always
getting out. That
was the fear
two signs
fading but recalling
they had faded like words
fade in stone because
of the rain and the days
and waking and the dream
is leaving with every
step leaning over the meat
because I do not want
you to have died in vain
kissing the turkey and
the neck of  my dog
all animals am I.
all dreams, all stone
all message am I.

The inclusion of such simple, domestic images, such as the screen door and “cats always / getting out” create a push-pull between the heady opening and the bright clarity of memory. The poem ends as if in meditation, where everything is coalesced into the “I,” although it’s clear from the poem that loss is also a part of the “I.”


I’m really obsessed with the language of my poems being language that is in the world. I’m not having to give birth to new language – I’m using the language that is already there. I’m putting it next to language that might be surprising. Like when you look at a film and see how a film is edited – here are visual puns and auditory puns and there’s repetition and a pan and it’s just an inventory. There are so many different devices which we use in poetry and writing too. I’m interested in recombining different kinds of moments that can be grasped in language and putting them next to each other.

“That Rat’s Death” is certainly comprised of “language that is in the world,” but it also shows Myles’ ability to make seamless leaps and connections between “different kinds of moments”:

bring u back again

Myles moves us from the immediate and intimate death of a rat to war, which is present in the poem as both recent and epic history. The death of the rat is rendered personally and with tenderness: “whose insides / whisked the street,” while in the lines that follow, the body is simply a balloon that “just / bursts.” Even Myles’ brief use of “u” for “you,” creates friction against the “huge cool breath” of a life ending. As Teare writes, “Myles’s genius lies in making the grand gesture that includes the trivial detail and the sublime at once, their juxtaposition underscoring how we are small and made large by connection, paradoxically isolate and dependent.”

Myles was born in Cambridge, Massachusetts; graduated from the University of Massachusetts-Boston in 1971; and moved to New York City in 1974. She gave her first reading at CBGB's and then gravitated to St. Mark's Church where she studied with Ted Berrigan, Alice Notley and Bill Zavatsky. She was assistant to James Schulyer in 1979 and was the Artistic Director of the Poetry Project from 1984-86. Myles has received a Guggenheim fellowship, a Warhol/Creative Capital art writers’ grant, and the Shelley Memorial Award from the Poetry Society of America. She contributes to a wide number of publications including Artforum, Bookforum, Parkett and The Believer. She is a Professor Emeritus of writing and literature at UC San Diego and currently teaches at New York University, Columbia University and the Naropa Institute. She lives in New York City.
© PoetryFoundation.org
Bibliography

Prose
The Importance of Being Iceland: Travel Essays in Art, Semiotext(e), Los Angeles, 2009