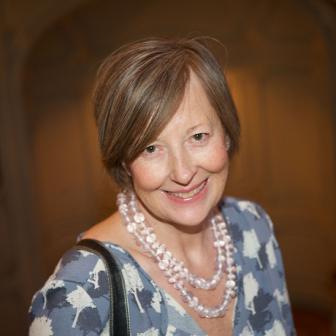 (United Kingdom of Great Britain and Northern Ireland, 1958)
© Hayley Madden for the Poetry Society
Biography
Author of seven full collections of poetry and many pamphlets and collaborations, and editor of the influential Sixty Women Poets (Bloodaxe, 1993), Linda France is an expansive force in contemporary British poetry. Her work is finely-tuned and wide-ranging, encompassing a verse biography of the eighteenth-century Lady Mary Wortley Montagu, a book of rengas, and poems about gardens, the past, and love. Her poem about a sexy flower, ‘Bernard and Cerinthe’, won the 2013 National Poetry Competition, and she is currently researching plant ecology for her next collection.

Linda France’s poetry is marked by a sense of space, attentiveness towards nature, and a rigorous faculty of observation – three qualities seemingly forged from events in her life. She was born in 1958 in Newcastle-upon-Tyne, and spoke with a Geordie accent until the family moved south to Dorset along with the paint factory her father worked in. She describes starting school and having to “forget how to talk Geordie and construct for myself a new mongrel language that both did and didn’t declare its not-belonging anywhere identifiable”, and credits this with turning her into a writer.

She describes the experience in the poem ‘North and South’, in her first collection, Red (Bloodaxe, 1992):

To survive, I had no choice but to try
To make my mouth echo back their fat ain'ts,
Become a chewing cow; or at least pretend.
I parroted their slow accents, even
Though the long feathers never really fit.
I plucked them out, the first chance I got;
But discovered I'd also lost, mid-flight,
My native accent I thought was bone.

In its place was this anonymous voice

Drawn back to the North, she studied “English and History and a bit of history of Art” at Leeds University, “the furthest North I could imagine going at eighteen”. After spending time in London and Amsterdam after her degree, she moved back to the north-east in 1981 with her two sons, where they lived happily for ten years in a house with no electricity and no road. She currently lives in Northumberland, near Hadrian’s Wall, with central heating and full power.

A fall from a horse in 1995 left her with two broken vertebrae and a cracked hip – an experience which “has had a profound effect on the way I see the world and continues to send ripples inside and out”. One effect it had was to send the poet to Buddhist mindfulness practice as a method of pain management, and this has since become a strong influence on her work. A poem called ‘Vertebra’ (from her 2010 collection You Are Her) addresses this directly:

I wonder if anyone will hold mine in the palm
of their hand, the one with a crack in its left wing
that unlocked all the hurt in me and took years

of stillness to heal

Linda France won the Basil Bunting Award in 1988 and 1989, and was awarded a Northern Arts Fellowship at the Tyrone Guthrie Centre in Ireland in 1990. In 1993 she received the Arts Foundation’s first Poetry Fellowship. Her first collection, Red, was published by Bloodaxe in 1992. Since then she has written seven full collections, worked on many collaborations with visual artists, been poet in residence, and worked on over 40 public art projects. According to the website A-Gender, which lists women poets in Britain, “Over 35 collaborations have seen Linda France’s poems carved in wood and stone, cast in metal, etched on glass, painted, embroidered and available via QR code.” France’s residency at Chester’s Walled Garden resulted in her pamphlet, The Moon and Flowers, made up of twelve poems in a folding map, which were used in a recording by Chris Watson.

Her second collection, The Gentleness of the Very Tall (Bloodaxe, 1994 – long-listed for the Los Angeles Times Book Award) was followed three years later by Storyville (Bloodaxe 1997), a collaboration with visual artist Birtley Aris and musicians Keith Morris and Lewis Watson. These were followed by a Fellowship at the Fine Arts Work Center in Provincetown, Massachusetts in 1998, her first of two Hawthornden Fellowships in 1999, and a Poetry Society Poetry in Public Places Residency in Mowbray Park, Sunderland, in 2000. She won Joint First Prize in the Stand Poetry Competition in 1996.

In 2005 France published The Toast of the Kit-Kat Club, a biography in verse of Lady Mary Wortley Montagu, herself an indefatigable writer, traveller and poet of the early eighteenth century. Lady Mary is best known for her letters, but was ostracized for a satirical poem she wrote, and then attacked in Alexander Pope’s Dunciad when, as the legend goes, she rejected his advances. She was an early traveller in what is now Turkey, and brought home with her a passion for vaccination; she inoculated her own child to persuade London society to follow suit.

The poem ‘Like a Phoenix’ describes Lady Mary’s experience “under the constellation Pox”:

And when I awoke I bore its brand
on my face, a rash of empty white stars,

a snappishness in my lashless eyes.
Now I was nobody’s child. I’d seen

the blackness at the edge of the sky

The book is slender but economically tells the story of an intelligent and energetic woman who addressed a full, rich, and often public life through both solitude and writing – a trajectory in some ways mirrored by France’s own.

France’s 2009 collection, book of days (Arc), is a series of renga which the poet wrote, one a day, over a year. On her website she writes:

It was an opportunity to watch the year as it passed and to save what caught my eye or seemed important, a mixture of the ridiculous and the sublime. I would never have expected such a tight form to admit so many interpretations and invite so much appreciation.

You Are Her (Arc, 2010) is France’s first ‘miscellaneous’ collection since 2002, and includes a section devoted to another Northumberland native, the great landscape architect Capability Brown. The title comes from an old information board on Hadrian’s Wall, and the book is infused with both the mild humour of this, and the conundrum of its literal meanings. The frame of reference is broad, reflecting (as France says) her “fascination with the landscape, biography, gardening and the eighteenth century”. The poet’s eclecticism is seen in a poem called ‘New Planet’, where:

Like fairies quarrelling at a christening,
the astronomers can’t decide what
to call her – this baby planet no one can see

The book contains some of her most satisfying writing, in which every sound counts. The poem ‘Joy’ begins:

Two magpies loiter, wing to wing, at the lip
of the pond; dip big bills into its dark bowl.

France’s poem ‘Bernard and Cerinthe’, described by one northern newspaper as “a sexy poem about a plant”, won the 2013 National Poetry Competition. It describes an encounter involving a flower France discovered one day, having never seen it before – the Cerinthe major ‘Purpurascens’:

He’s caught in the unfamiliar ruffle
of knickerbockers or petticoat, a scent

of terror, vanilla musk. If he were
not himself, he’d let his trembling lips

articulate the malleability of wax;
the bruise of bracts, petals, purple

The Guardian quotes the poet saying, “my sense was that it was very sexy, as many of them are. Cerinthe conceals and reveals at the same time, it has a flirtatiousness about it that’s very seductive”.

France is currently travelling and researching “the effects of light on plants and humans and the implications of changing global weather systems”, in preparation for her next book.

Meanwhile, in You are Her, the ‘38 Poems She Never Wrote’:

Stone fruit. Fish. A Spell to Dissolve Desire.
Driving in the Dark. Blue Yodelling.
Jet. The Life Cycle of the Dragonfly.