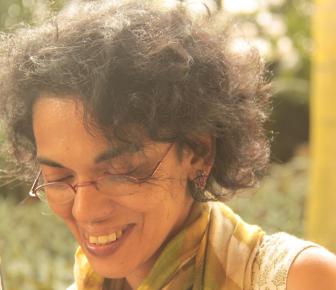 (India, 1972)
© Mujib M. K.
Biography
Karthika Nair published her first book of poems, Bearings, in 2009. Her other works include a book of children’s fiction and a work entitled DESH: Memories inherited, borrowed, invented. Her poetry has been widely published in journals and anthologies. She writes in English.
Born in Kerala, India, Nair moved to France in 2000 to pursue a Masters in Arts Management, and stayed on in Paris thereafter. She has worked for several years with various cultural institutions in Paris, and elsewhere in Europe, as dance producer and curator. She is the script-writer of DESH, choreographer Akram Khan’s award-winning dance production, together with performance poet PolarBear and Khan himself.

The proximity to performing arts, and to dance in particular, is evident in much of Nair’s poetry, which presents a striking blend of density and mercurial fluidity. This ability to combine the abstract with the kinetic, a cortical agility with wiry energy, is in evidence in her new Mahabharata sequence of poems, published here for the first time.

There is also a palpable excitement about language, its textures and inherent dynamism. ‘Watch them dance and battle, torque and turn, coil, curve and spin. Undulate,’ she writes in one poem, offering what could well be a note on her personal approach to verbal choreography.

Also present in her work throughout is a note of urgency – an intense need to record, to register, to document, to celebrate, to continue the fight, whether ‘with opium, with delirium’ or ‘with rhyme’ against ever-impending siege and obliteration, to carve out space for ‘little stories, giant histories, a few myths’, to etch on memory’s palm something that could be called ‘the human crease’.

Nair’s poems embody the fierce human impulse to survive in a marauding universe where dreams are constantly snuffed out (by design, legislation or indifference). This is poetry in which every word, every breath – ‘untrammeled, expansive, mine’ – is acknowledged with gratitude as fragile, hard-won, intensely and desperately precious:
Before god
Before the dead
Before children
Before a world
Dance.

Before the sea drowns
Before clouds conflagrate
Before the phoenix drops
Before thorns flower
Write.

(Constancy VI, from the Prologue of  ‘Until the Lions’)
© Arundhathi Subramaniam
Bibliography

LINKS
Muse India, RædLeafPoetry and Sangham House (DESH poems): More poems by Karthika Nair.
Words Words Words: Karthika Nair's blog; posts include an essay 'What ehr should art do?' for Museum International and summaries of some of the DESH stories.
Open Space and The Hindu: Essays by Karthika on ekphrastic poetry in her work and her early experiences of reading poetry.
Helter Skelter and Outlook: Interviews with Karthika Nair on her work.

Eight Ways to Infiltrate Dreams of Battles for Dancer-Vampires