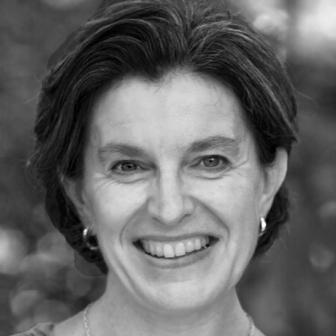 (United States of America, 1957 - 2014)
© Miriam Berkley
Biography
Born and raised in Chatham, Virginia, Claudia Emerson studied writing at the University of North Carolina, Greensboro. Emerson’s poetry, steeped in the Southern Narrative tradition, bears the influences of Ellen Bryant Voigt, Betty Adcock, and William Faulkner. Of the collection Late Wife (2005), poet Deborah Pope observed, “Like the estranged lover in one of her poems who pitches horseshoes in the dark with preternatural precision, so Emerson sends her words into a different kind of darkness with steely exactness, their arc of perception over and over striking true.”
I did keep
the mirror, perhaps because like all mirrors,
most of these years it has been invisible,
part of the wall, or defined by reflection–
safe–because reflection, after all, does change.
I hung it here in the front, dark hallway
of this house you will never see, so that
it might magnify the meager light,
become a lesser, backward window.

–from “Frame, An Epistle”

In an interview with Shenandoah magazine, Emerson explained:


The fruitful tension between line and sentence is extremely important to me – in my work and in others’ . . . I work hard to craft lines with formal integrity, so the line itself will have what Mary Kinzie calls ‘half meaning.’ The poem can only be so long and maintain that kind of intensity as a stand-alone thing; in sequence, though, the linked or recurring images create the longer poetic experience.

To understand the value of sequential poems in Emerson’s work, read “Environmental Awareness: The Right Whale”, “What They Are Missing”, “Physical Education’, and “Reunion Weekend’, which are part of a 25-poem sequence called All Girls School published in Figure Studies. (The two “Early Elegy” poems are also part of a sequence.) Emilia Phillips, introducing some poems from Emerson's not-yet-published collection Claude Before Time and Space, also noted the importance of sequential poems in Emerson's work. (“Bee”, “Drybridge”, “Vortex”, and “On Leaving the Body to Science” are all from Claude Before Time and Space.) Phillips writes:


Claude is a thin volume at only 59 pages – including frontismatter! – in three sections: “The Wheel,” “Bird Ephemera,” and “Claude Before Time and Space.” The first two sections are what Claudia called “stand-alone poems,” and the last section offers a series of sonnets or sonnet-esque poems about Claudia’s father Claude. I say all this as an introduction because the book was as important to Claudia as the individual poems, and, for me, each of Claudia’s books offer us a kind of “poem at large.” It’s kind of like a fractal: the movement is the same at both the micro and macro level.

Form is elegantly tied to subject in Emerson’s work. In Late Wife, for example, many of the poems are sonnets in which the first stanza focuses on the past and the second stanza moves the poem into the present. Most of All Girls School, by contrast, relies on couplets:

But after it was no longer needed for fat,

men still hunted the whale for its rich mouth
of baleen, harvested for hairbrushes,

body, sculpt a waist so small a man's
hands could meet with ease around it.
– from ‘Environmental Awareness: The Right Whale’

Musicality is also a notable feature of Emerson's poems. At VQR Online, Jon Parrish Peede states, “Beneath the surface of Claudia’s poems, the structure shows how essential songs were to her creative process. Timing, rhythm; flow, meter; pacing, narration; whatever terms one wishes to deploy, the relationship of song to her poetry is distinct.”


When Claude says blessed is he who has seen
and believes, you know he is about to tell the one
about bees. His father told him which kind

of sting was worst, but you have to see some things
for yourself, and when you ask how on earth
do you catch a bee to see anything, he tells how

and then ambles down into the sweeter sleeve.

Although aurality is an important feature, Emerson's poems also showcase how language helps us fathom life’s most difficult circumstances by highlighting what (and how) words mean.


The my becomes
a the, becomes
the state’s

the coroner’s,
a law’s, something
assignable,

by me, alone,
though it will not
be the I

I am on
leaving it.

– from “On Leaving the Body to Science”

Emerson was poetry editor for the Greensboro Review and a contributing editor for Shenandoah. She taught at Washington and Lee University, Randolph-Macon Women’s College, the University of Mary Washington, and Virginia Commonwealth University. Her honors include two additional Pulitzer Prize nominations as well as fellowships from the Library of Congress, the Virginia Commission for the Arts, and the National Endowment for the Arts. She was the poet laureate of Virginia from 2008-2010.
© poetryfoundation.org
Bibliography