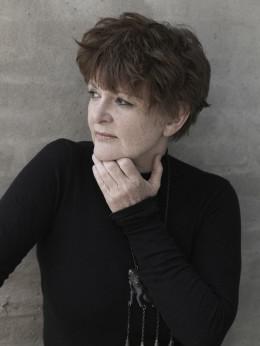 (Norway, 1951)
© Søren Bruun / Kolon Forlag
Biography
In contemporary Norwegian literature, Løveid is nearly always spoken of as a genre transgressor: there is poetry in her plays, theatre in her poetry, and she writes a prose which is a synthesis of various genres. In her later publications, she has increasingly investigated cultural-historical and societal themes in a more essayistic style. Despite her outsider status in terms of genre, she has been and still is one of Norway’s most visible and celebrated authors. She has been notable, however, for being exceptional, rather than as a representative for any literary trend, tendency or grouping.
Cecilie Løveid made her debut in the 1970s when there were strongly held positions in Norwegian literature by both the radical left – represented by, among others, the many Marxist-Leninist authors – and by the establishment – that is to say, officialdom’s accepted and dominant opinion of art and literature. Much of the poetry that was written at that time suffered from the instrumentalism which arises when poets in a certain environment are whipped into moral and political engagement; most of the agit-prop lyric poetry that was written during that period has faded away. Løveid has always avoided being an instrumental poet; her attitude to language and orientation towards avant-garde artistic and literary trends have given her an immunity to over-simplification by, and accommodation of, prevailing political conditions.

As an experimental language artist, she operates freely amid all kinds of art and uses elements from the knowledge she has of painting, photography, music, dance, theatre, film and folklore and its study. Few texts are so interwoven with associative connections and, at the same time, so loaded with wholly concrete quotations, whether with roots in other literature, or in visual art, film or theatre; indeed, one might say that she is involved in the business of quotation across the various art forms.

Cecilie Løveid has said that she regards the writing of a text “as making an object”, and that she is, first and foremost, trying to get this object to seem well-made. It is most likely this way of thinking that results in texts that seem strict, limited and almost ‘moulded’ while being, at the same time, open, playful and flirtatious.

Despite an experimental focus on what it is to write poetry, Løveid retains a focus on classic themes such as life, death and love. In addition, her interest in classic literature and philosophy, from Euripides to Botho Strauss and from Plato to Wittgenstein, is clear throughout. As such, Cecilie Løveid is both a bearer of tradition and a force for renewal within Norwegian literature.
© Steinar Opstad (Translated by Cameron Sharp)
Bibliography

HER PHOTO IN POLITIKEN

INSTRUCTIONS FROM THE COINCIDENCE