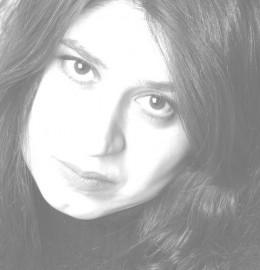 (Iran (Islamic Republic of), 1977)
© Rosa Jamali
Biography
Rosa Jamali was born in November 1977. She studied Drama at the Art University of Tehran. Her first book, This Dead Body Is Not an Apple, It Is Either a Cucumber or a Pear, was published in 1997, and opened Persian poetry to new creative possibilities. Through broken syntax and word-play, she described a surreal world in which words have lost their real meanings and have simply become jumbled objects within contemporary everyday life.

Her second collection of poetry, Making a Face, was published in the same year. This collection, with its stream-of-consciousness narrative poems, merged different types of discourses and registers – sometimes archaic, sometimes colloquial, written, formal, informal, journalistic, scientific. Jamali adapted a kind of music from classical Persian poetry and imbued it with the natural cadences of speech, juxtaposing long and short sentences, infusing the whole with her bitter and distinctive sense of humour.

Her third book of poetry, Making Coffee To Run A Crime Story, came out in 2002. The long title poem of the collection was inspired by the famous Persian story ‘Blind Owl’ by Sadegh Hedayat. In the Persian story, the narrator is a who man chops a woman to pieces; in Jamali’s poem, however, it is the woman who does the chopping and the narratorial point of view shifts frequently. With descriptions more redolent of crime fiction than of poetry, the language of Jamali’s poem is cruel and rough. In an interview, the poet said of writing the poem:

I was inspired by mythological women and Greek tragedies, such as the story of Medea who kills her children and starts the fire; such as Antigone, who doesn’t know where to bury her brother; such as the famously cruel character in Islamic history of Hendeye Jegarxar, who eats the fallen pieces of Prophet Mohammad’s uncle. I was also inspired by crime fiction, but in my poem I really wanted to convey the old mythological significance you see in Greek tragedies: that a murder is a sacrifice, allowing one to set oneself free and find salvation, whereas in modern society murder is seen as a crime of the kind that Dostoevsky describes in Crime and Punishment, in which Roskolnikov fails to regret the murder he commits.

In her recent poems, for instance in her collection The Sand Glass Which Has Fallen Asleep, Jamali examines death and love from a philosophical point of view, in the way that Omar Khayyám did, so many years ago.

Poetry in Farsi
This Dead Body Is Not an Apple, It Is Either a Cucumber or a Pear, Vistar, Tehran, 1997
Making a Face, Naqsheh Honar, Tehran, 1998
Making Coffee To Run A Crime Story, Arvij, Tehran, 2002

The Only Resident of this House is the Gloomy Hawk

The Last Street of Tehran