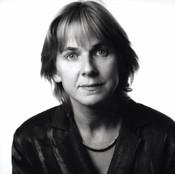 (Nederland, 1952)
© Tineke de Lange
Biografie
Joke van Leeuwen is among the Netherlands’ most acclaimed writers of children’s books. Yet to pigeonhole her as a children’s writer would do injustice to her many talents. She not only writes but also draws, and not just for children but for adults too. And she also writes poetry. However different these forms of expression may be, Joke van Leeuwen effortlessly brings them together: her drawings are integral parts of her stories and poems, and poetry features in her stories.
In her children’s books, nothing seems out of the question. Words and pictures carry her characters – and the reader – along on eventful, associative journeys full of surprising and absurd situations, often created by grown-ups who cannot or will not listen to what children have to say. The boy Magnus, in Magnus Draws an Underground, finds he can ride on an underground railway he has drawn on paper, while another character, Deesje, goes to visit her half-aunt and finds herself in a world of very strange people.

Van Leeuwen’s debut poetry collections Laatste lezers (Latest readers; 1994) won the C. Buddingh’ Prize, and her 2007 collection Wuif de mussen uit (Wave Goodbye to the Sparrows; 2007) was nominated for the VSB Poetry Prize. Her stand-alone poetry is more restrained in tone than her work for children. And while she takes children seriously in her children’s stories, in her poetry she gives a voice to the outsider. In Laatste lezers, she devotes a cycle of poems to a psychotic, and in her 2001 collection Vier manieren om op iemand te wachten (Four Ways of Waiting for Someone), she quietly sympathises with the ‘uprooted’ of this world: “Their Lord came with them; He can be worshipped here, / their Blessed Virgin has familiar eyes.”

Language is a major theme in Joke van Leeuwen’s work: she exposes its inadequacies and plays with its sounds and its ambiguities. In many of her drawings she shows what happens if certain expressions are taken literally. The cycle ‘Child in Brussels’ in Vier manieren om op iemand te wachten expresses the confusion in a child that finds itself in a new environment, where everything is different, including the language: “I had / to get more words. But how to know / if what I meant my words to say / and they their words in their own way / would be the same.”

Even when dealing with ‘heavy’ subjects, Van Leeuwen’s poems are never heavy. They have the light touch of someone being in superb command of language and all the wonderful things one can do with it.


Joke van Leeuwen was commissioned to write the 2012 Dutch and Flemish Poetry Day chapbook. The ten poems of Half in de zee (Half in the Sea) will be published here, along with audio and translations, on 26 January 2012.
© Janita Monna (Translated by Ko Kooman)
Bibliography

PREPARATION FOR THE EXAM