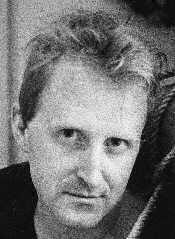 (België, 1960)
Biografie
Peter Holvoet-Hanssen’s trilogy Houdini’s Straitjacket (1998), Strombolicchio (1999) and Santander (2001) blew a fresh wind across the Flemish poetic landscape. Emulating Houdini, Holvoet-Hanssen stretched boundaries and wriggled out of manacles, all while alluding to the accepted constraints of the poetic form.

The poet aptly calls himself an ambassador of the "active ingredient", never afraid to bring life’s extremes together in his adventurous work. He combines highbrow with lowbrow, the inaccessible with the accessible, humour with emotion, daily routine with insanity. The theatrical and the musical are characteristic of his work, and he is much in demand as a performer at literary events as a result. The diptych Spinalonga (2005) and Navagio (2008) completed his earlier journey into poetry.

Then, in The Trip to Inframundo (2011), Peter Holvoet-Hanssen presented a challenging selection of poems taken from the five previous collections, altering the original chronology and combining poems in new ways. Thus he constructed a completely fresh collection in which he followed emerging trails  before they could fade away. The book marked the starting point of a new journey.

Two volumes of a new trllogy have been already published. In these the poet goes on a quest inspired by Paul Van Ostaijen, who introduced modernism to poetry in Flanders at the beginning of the twentieth century, and who followed a line of poetic development that began with Guido Gezelle. Typically for Holvoet-Hanssen, he focuses on the musicality of Van Ostaijen's poems and now writes what he calls "music box poems", which contain a soothing musicality but also express the most haunting and terrifying themes, as in Jalalabad Blues.

Treblinka, Sobidor, Nagasaki – kamikaze-aviator: crystal-splinter-death-creator,
I staggered forth, bludgeoned blue as the frozen ghost of the Deep Dark Hole
in Johannesburg, in the fifth isolation cell, sjamboks
Ho Chi Minh, Phnom Penh, the river was red,
Sarajevo’s bleeding grit, remember the images on your TV screens
1999: grandma mutters in the wheelbarrow – from Pristina to Neprošteno,
earthquakes carrying the suffering of war, confluence of rubble and blood
at your mouth Muzaffarabad Kashmir necropolis
not a jumper but blue like children freezing in sackcloth and ashes

In addition, Holvoet-Hanssen has developed into a real ambassador of his own poetry on stage, and also a promotor of poetry as such. He served as the poet laureate of the city of Antwerp from 2010 till 2012 and wrote an essay on the importance of poetry on request of the Flemish Fund for Literature. In this essay he goes on a trip through world poetry as if it were a treasure hunt, which Brecht Evens, an internationally well-known illustrator and graphic novelist, drew as an imaginary map of world poetry. See: The World of Poetry Mapped: The Land of Music-Hall

To date, Peter Holvoet-Hanssen has also published two novels, The Flying Monk (2004) and Salt Scraper. Expeditions (2014). Together with Koen Broucke, Koen Peeters and Pascal Verbeken, he published Miavoye. A Pilgrimage to Paul Van Ostaijen with De Bezige Bij Antwerpen in 2014.

The Garden of Poets

THE PRINCESS IN THE GLASS MIRROR

THE CURDLING REVENGE OF CAPTAIN GRAPPLEHOOK

SONG FOR THE DEAD

ROZA AND THE MOON