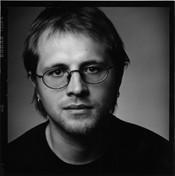 (Oekraïne, 1974)
© Pieter Vandermeer
Biografie
Andriy Bondar is one of the most popular and, at the same time, one of the most unread among the younger generation of Ukrainian poets. His public readings attract full houses, yet since the time of his appearance on the Kyiv poetry scene in 1997, no critic has managed to write a fundamental article about him. Without overstating, he can be called a star of the contemporary literary world: he is a renowned columnist and critic, he is asked to write introductions and afterwords to the most popular books, and for the past few years in a row his literary column in the most respected newspaper The Mirror Weekly has won every possible award. Is this why he is sometimes overlooked as a poet?
Born in historic Kamianets’-Podilsky, Bondar enters the Kyiv-Mohyla Academy in 1994 and moves to Kyiv, where within a few months he loses a thick notebook containing all the poems he has written in the past 3 years. He starts “from a blank slate”. In 1997 he wins the first prize in the most notable literary contest for youth held by the Smoloskyp publishing house, which in 1998 publishes Andriy’s first book Spring Heresy.

One can only speculate as to why this book did not reach the readers. It is a fact that it was not sold at regularly held youth seminars, contests and Smoloskyp readings. Was Andriy’s poetry too adult for “youth contests”? Did the uncensored language frighten the publisher? Was Bondar insufficiently patriotic for this very patriotic publishing house?

It is truly unclear. But within a few years Bondar decides to remind everyone about himself and in 2001 publishes a collection of his poetry, Truth and Honey, which includes selections from his previous book along with new pieces. This collection is an example of the most refined poetry, a wondrous and magical literary game, and metaphorical richness. The Bondar of Truth and Honey is a real “poet of culture”, who enthusiastically plays the glass bead game, testing the abyss of his encyclopedism.

Nevertheless, poetry triumphs, by exhausting the well of cultural visions. After Truth and Honey, Andriy stops writing poetry for a while. He writes prose, which he prints practically nowhere. He writes numerous essays, articles and reviews. He works for periodicals and newspapers.

And suddenly, at the end of 2002, a completely new Bondar appears – harsh, uncompromising, and free-versing. He passionately throws himself at life, as if till then he had lived in a measure of illusion – and suddenly his eyes opened up. His new poetry draws polar reviews: either complete admiration or categorical rejection. In January 2003, the poetry readings of Andriy Bondar, Yuri Andrukhovych and Serhiy Zhadan gather unheard of full houses. Almost an hour after the start of the reading, people who couldn’t make it inside, were still standing by the Youth Theater, waiting . . .

His long-awaited book Primitive Forms of Ownership appears only in September 2004. The poetry is very ironic and self-critical. The world with an unrestrained blast of microparticles bombards every cavity of the poet’s body, and comes out with the blood, in the strangeness of tender and piercing poems of a person, who is not afraid to live.

you can’t pay me a better compliment

It might not be immediately obvious to a non-Ukrainian reader what a remarkable breath of fresh air it is to read the poems of Andriy Bondar, especially from the latest, just published collection Primitive Forms of Ownership. Andriy is of the same age as his friend and colleague Serhiy Zhadan (both were born in 1974), yet the two of them, to my mind, exemplify quite different paths of poetic development – although they do share many common premises and interests. While Zhadan’s roots are in the often brutal countercultural rebellion of the Rimbaud-Futurists-Beat poets tradition, Bondar began as a reviver/reinventor of high Modernism cut short by Stalinization of Ukrainian cultural life in the 1930s. In the afterword to his 2001 volume Truth and Honey, Yuri Andrukhovych rightly invokes the names of Lorca, e.e. cummings, and crucially, the early Mykola Bazhan, the author of intense, challenging expressionist poetry (and later, Rilke’s Ukrainian translator). Bazhan did capitulate to the Soviet regime, but Bondar, Andrukhovych asserts, picked up the lineage of this difficult, “other, desirable Bazhan.”

Andriy’s new book of poems is much closer in its tone to the American poets of the New York School (notably, one of the poems translated here alludes to John Ashbery), an also to their followers, the group of post-communist era Polish poets known as ‘the O’Haraists’. Their “creative misreading” of O’Hara, Ashbery, Schuyler and others is, in turn, “creatively misread” by Bondar. His poems are rooted in the autobiographical here and now, their voice is bold and fresh, refreshingly open, fragile, and unaffected. This is a feature I believe he also shares with some of the Russian poets of his generation, of the trends the critics have labeled ‘Post-Conceptualism’ and ‘New Actionism’. Perhaps most importantly, Bondar’s new poetry manages to combine, in a truly impressive fashion, the rootedness in all the problems, complexes and neuroses of the post-Soviet/postcolonial double bind, in which Ukrainian culture finds itself, on the one hand, and the emphatic engagement with the processes of cultural globalization, on the other.

Andriy’s poems are uniquely his, and his only, yet they also provide an excellent insight for the foreign reader into the hopes and anxieties of the Ukrainian intellectuals of his generation. They have also been a pleasure to translate, as one senses their intimate energy and vigor, and a feature I would describe, borrowing a phrase of Perry Anderson’s, as “a sense of lucid enchantment with the world.” I hope these translations succeed in conveying some of this enchantment to the English-language readers.
© Vitaly Chernetsky
Bibliography
Poetry
Vesinnia yeres (Spring Heresy), 1998.
Istyna i med (Truth and Honey), 2001.
Prymityvni formy vlasnosti (Primitive Forms of Ownership), 2004.

In Lithuanian
Vladas
Poems, also in the original

The Eastern Revanche on the Horizon
Essay by Andriy Bondar, also in English

Just don’t push me away

the men of my country