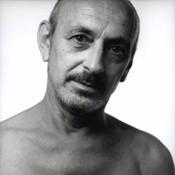 (Roemenië, 1939)
© Tineke de Lange
Biografie
Lev Berinski was born in Romania. His family fled east during the war and in 1945 returned to what is now Moldavia. In 1963 Lev went to Smolensk in Russia to study German, then to Moscow to study literature.
His first collection of poems in Yiddish appeared in Moscow in 1988. He worked as a teacher and translated from Yiddish: Isaac Bashevis Singer, Marc Chagall, Mordechai Zanin and others.

In 1991 he emigrated to Israel. A collection of his poems in Russian appeared in Tel Aviv the following year, and in subsequent years he published a number of collections in Yiddish, including Fishfang in Venetshe (Fishing in Venice).

Lev Berinski now has four collections of poetry in Yiddish to his name, and three in Russian. His Yiddish collections have been translated into Russian, German and other languages. He has won several prizes for his poetry, including the 1993 Sara Gorby Prize and the 1997 Itsik Manger Prize, the world’s highest Yiddish literature award.

Berinski is regarded to be a modernistic poet. His verse is marked by associative symbolism and original metaphor. He combines a traditional Jewish consciousness with a modern secularist world view, but his subjects are by no means traditional, as appears from a poem like ‘Quantum Theory’.

Lev Berinski’s poems are proof that the Yiddish language, regarded by some as dead or dying, is alive and well. Berinski still lives in Israel, where he works as a journalist and a writer. He is president of the Association of Yiddish Writers and Journalists.
© Ariane Zwiers (Translated by Ko Kooman)
[Lev Berinski took part in the Poetry International Festival Rotterdam 2000. This text was written on that occasion.]