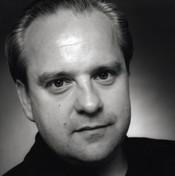 (Nederland, 1961)
© Pieter Vandermeer
Biografie
Anne Feddema grew up in his native town, where he still lives and works. Feddema is a many-sided artist, a highly talented painter as well as a poet. He studied visual arts in Haarlem (1986-1988) and soon made his name as a painter of playful, imaginitive scenes.
For many years he could be heard on Frisian radio with a weekly story in his native 'Leeuwarder' dialect. In 1991 he published his first poems in Frisian in the literary magazine Hjir, and in 1997 his first collection Slapstickiepenbierings (Slapstick Revelations) saw the light.

Anne Feddema, the poet, declares war on reason, unravels anything faintly smacking of meaning, and juggles with words and sounds to his heart's content. He draws much inspiration from the German Dadaists, especially the fellow poet-artists among them, such as Schwitters, Kandinsky and Klee, some of whose work he translated.

Feddema's debut volume Slapstick Revelations was very well-received. It contains tender encounters with artists and paintings, but it also frivolously takes the mickey out of our proud civilization. Feddema introduces historical celebrities such as Goethe, Mozart, Liszt and Jesus Christ, casting them in silly roles and making them fool around in his absurdistic world. Goethe is heard swearing at Eckermann for occupying the loo; Jezus Christ makes his triumphant entry from a neighbourhood café in the town of Franeker; Mozart plays a 'nappy sonata'. A cultural apotheosis is the appearance of the old composer Franz Liszt, wheezing around on 'his ancient chromatic bike'.
© Jabik Veenbaas (Translated by Ko Kooman)
[Anne Feddema took part in the Poetry International Festival Rotterdam 1999. This text was written on that occasion.]