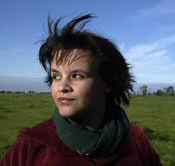 (Nederland, 1969)
© Ronald Hoeben
Biografie
Albertina Soepboer was born in the small town of Holwerd in the Dutch province of Friesland. She now lives in Groningen, where she first studied Romance languages and cultures and then Frisian literature. She writes poetry in both Frisian and Dutch, and has so far published five collections of poems in Frisian and two in Dutch. A book of Dutch translations of her two Frisian collections De stobbewylch (The Pollard Willow, 2000) and It nachtlân/Het nachtland (The Night Country, 1998) was published in 2003; the book includes the original poems in Dutch from the latter collection.
In her early collections, Soepboer showed herself a sensitive researcher of the female identity, displaying her exceptional talent for powerful earthy, sensory images. In her recent work she actually continues her research, while broadening her thematic range. In her collection It nachtlân/Het nachtland she explores, in a close-knit chain of poetic sequences, the meaning of elementary spheres of life, focussing in particular on the language carrying that meaning. She pays special attention to the complexity of a bilingual situation, for instance in a poem like ‘Hermans huis’ (Herman’s House), where she uses alternating Dutch and Frisian stanzas.

The triptych ‘Woartels’ (Roots), which Albertina Soepboer read at the Poetry International Festival in 2003, was taken from It nachtlân/Het nachtland. In this triptych a woman returns to her country of origin. She signals the pain of growing up, but also the pain of being alienated from one’s native country and language. In addition, she read a cycle from her collection De fjoerbidders (The Fire Worshippers) that appeared in 2003, singing of a lost love in dark, sober images, and finally her poem ‘Moeder Spin’ (Mother Spider), a moving account of how a woman accommodates the adult and the child within herself.
© Jabik Veenbaas (Translated by Ko Kooman)
[The original version of this text was written for the Poetry International Festival Rotterdam 2003; minor changes were made by Thomas Möhlmann.]

In Dutch:
Soepboer’s homepage
Soepboer on VPRO
A film of Soepboer at Poetry International Festival 2003

In English, Dutch and Frisian:
Information on Soepboer on the website of the Frisian Historical and Literary Centre.  (Tresoar)

I’LL NEVER BE YOUR MAGGIE MAY

DECEMBER IS THE COOLEST MONTH