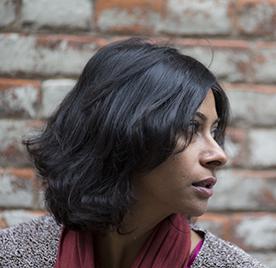 (India, 1971)
© Greg Bal
Biografie
The poetry of Sridala Swami, a Hyderabad-based writer, is a chiaroscuro of meaning and shadow, clarity and obliquity. A distinctive feature is its capacity for emotional restraint and self-containment. These poems do not strain after effect. They do not reach for easy drama, or overt emotionality. And yet, even as they oscillate between aloofness and ardour, between the laconic and the lyrical, language is invariably deployed with attentiveness.

Swami's first collection of poems, A Reluctant Survivor (2007), was published by the Sahitya Akademi, India’s National Academy of Letters. Her second collection of poetry, Escape Artist, published by the Aleph Book Company (2014), is the first book to appear under the aegis of the Jehangir Sabavala Foundation (JSF). Swami has also written four books for children, published by Pratham Books in 2009 and 2012. She was the 2011 Charles Wallace writer-in-residence at the University of Stirling, Scotland, and a Fellow of the International Writing Program at the University of Iowa, 2013. The poet served on the jury of the Montreal International Poetry Prize in 2020.

The themes in this selection range from love to loss, from joy to heartbreak, although these are frequently inseparable in a Swami poem. The tone is carefully modulated, veined with guardedness and vulnerability, detachment and longing in equal measure. “He was irresistible,” she says in one poem, but qualifies it right away with the generic observation: “as only the very young of any species are programmed to be”. The predicament of a sick parent in hospital is conveyed in quiet, unvarnished lines. The rituals of caregiving, the relentlessness of pain, the efforts to “keep at bay the one word” that everyone dreads, are evoked with no overt attempt at poignancy. “The toilet is always too far away,” is the kind of spare sentence that characterizes Swami’s poetry of intense emotional economy. In another poem, the pain of “future shock” is tempered by the cautious decision to administer “small daily doses of loss”. And loss itself is made more bearable by dwelling on its residue: memory. “Leave if you must but leave me a groove/ in the mind,” she says, “down which memory can run like a cultivated habit.”

And yet, for all its enthusiasms and betrayals, its excesses and losses, a flawed human love is seen as preferable to a life of immaculate lovelessness. The story of Winnie Mandela – eulogized and vilified in her lifetime -- inspires a poem about ‘waiting’ for the absent lover, and the ways in which a scarred and fallible humanity can be preferable to a frozen, heartless purity and rigid marital fidelity: “But in the twenty or thirty years she has been away/ the world has left no mark on him;/ nothing acquired, nothing changed./ He is just as she left him.”

While a fierce maternal protective impulse pervades one poem, it also turns on its heel, as Swami’s poems often do, into a meditation on freedom, and the need, even when wings are clipped, to retain the capacity to dream of a life without limits: “I still dream of flight/ as if the bowl of heaven is an illusion/ just because I can see through it”.

This is poetry arrived at after a rigorous process of threshing and winnowing. The approach to form is meticulous, watchful. The plangent notes of loss, of the pain of love, are controlled by a poet deeply conscious of her craft. In a succinct poem in memory of the Indian poet Eunice de Souza and her legacy of distilled verse, Swami writes of the importance of keeping the faith in the hard-earned word, the one that arrives at the end of a tumultuous season: “A single flower/ at a difficult summer’s end/ will bloom fiercely/ and for a long time”.

The poet served on the jury of the Montreal International Poetry Prize in 2020.
© Arundhathi Subramaniam
BIBLIOGRAPHY  (selected)

NOT LOSS BUT RESIDUE