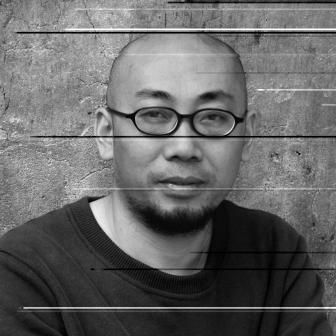 (China, 1971)
Biografie
Jiang Hao 蒋浩 stands out among his peers for his unique, and sometimes startling, grace and classical subtleties. A stone, a boat, a friend visiting or leaving, a pet that just died, every little thing leads to retrospectives in a well-crafted poem, written with a Taoist outlook. He is a poet with a strong sense of responsibility, as he states that “there was too much Western influence in Chinese poetry in the 70s and 80s. Starting from my generation things should change.”

A poet, essayist, editor, and book designer, Jiang Hao was born in Chongqing, Sichuan province of China, in 1972. He has wandered around the country working odd editorial jobs and finally settled on Hainan Island (i.e. South Sea Island). He is known in the poetry community for editing New Poetry, a book-like magazine that he started in 2002, which quickly became ‘classic’. He has published one essay collection and four poetry collections. He started writing poetry in 1987 and made his name with his long-awaited debut Rhetorics 《修辞》(2005), for which he earned the Tendency Literature Award that year. In 2011 he edited 50 collections of poetry by authors of his generation and won the literary award of the post-70s.

‘The Shape of the Ocean’ was translated into English in 2009, while the original poem was written in 2003 on Hainan island, south coast of China. Like some of his contemporary poets who have brought international travel experience into their poetry, Jiang Hao has written many poems that embody his life experience in Sichuan, Hainan, Xinjiang, Beijing and many other parts of China. What’s interesting about this poem is that it applies to everywhere, everyone. Is it possible to discover life’s true meaning through its surface or shape? Every little object tells you something about a certain aspect of life, but not all of it. While ancient poets lament the passing of time when facing the ocean, the moon, or the landscape, contemporary poets try to get away from sentimentality and explore new domains. Jiang Hao is not searching for one answer in this poem, he is not affirming or denying anything, he is looking for something that looks like fish but not fish, or fish but not called fish, or non-fish that’s called fish. He doesn’t need absolute answers. He doesn’t stick to one answer, but moves around in constant search for new meanings. His diction is clearly Taoist, which looks almost ungrammatical in modern Chinese. Although sometimes criticized as ‘pedantic’ or ‘over-learned’ by people who get confused on a first reading of his work, he is praised by others, who appreciate the classical elements in his work.

As an experimental poet, Jiang Hao has tried almost everything possible with poetry: local slang, performing in dialects, poetry in installation, and various other forms. He became the art director of Shangyuan Art Scene in 2008, the only independent residence program in China that provides free studios to 50 artists each year. Together with poet-artist Cheng Xiaobei, he has organized many exhibitions and events engaging poets and visual artists to facilitate cross-boundary interactions and adventures.

IN HASTE – FOR MY BABY

THE SHAPE OF THE OCEAN