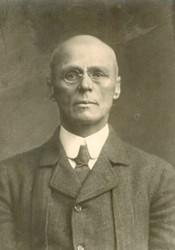 (Nederland, 1864 - 1927)
© Collection Letterkundig Museum
Biografie
Herman Gorter was a leading member of the Eighties Movement, a highly influential group of writers in the Netherlands at the end of the nineteenth century. His first book, a 4,000-verse epic poem called Mei (May), sealed his reputation as a great writer on its publication in 1889 and is regarded as the pinnacle of Dutch Impressionist literature. Gorter rapidly followed this up with a book of short lyric poetry simply called Verzen (Poems) in 1890, which was equally hailed as a masterpiece. Thanks to the publication of, amongst others, De School der Poëzie (The School of Poetry; 1897) and his endeavours to combine lyricism and social involvement, his poetic significance remained undisputed. Today his poems are regarded by many as the starting point for modernism in Dutch poetry as a whole.
Gorter’s Verzen marked a radical new departure in poetry, not only within in a Dutch but also within a European context. Gorter aimed at achieving a poetic form of what later became known as ‘sensitivism’: the recording of fleeting, fragmentary moments of individual experience with an almost mystical intensity. The only obvious points of comparison for this new-found artistic and verbal extremism are ‘Le bateau ivre’, ‘Voyelles’ and ‘Un saison en enfer’, by Rimbaud though there is no question of any direct influence.

The result of Gorter’s attempt was a series of a hundred or so poems, some of only two lines (e.g. ‘You’re a dusky white lily girl, / You’re a butterfly velvet swirl’) and none longer than a few pages. They still retain a thread of rhyme, mostly in full rhyming couplets, but this serves as a background for irregular line lengths and syntax, a radical use of neologism, synaesthesia, surging eroticism, a haunting fragmentary musicality and occasional astonishingly simple and direct love poems. Gorter’s explosive and sometimes tortured expressionism recalls that of his contemporary Vincent van Gogh.

“Any of our sophisticated compatriots, from the highest rank to the lowest, should take of his hat immediately, as soon as this man’s immortal name is mentioned.” – Dutch poet Willem Kloos in 1891

“He hasn’t grown old at all, Gorter, and I don’t think his best work ever will.” – Dutch poet Martinus Nijhoff in 1952

“So many years after his death, it’s still a great pleasure to read his poetry. For it is emotion, it is music, it is eroticism, and those never age.” – Dutch poet Pieter Boskma in 1997
© Paul Vincent & Thomas Möhlmann
Gorter’s poems have been published in over ten languages, including English (Crossway Series / University College London / Waxmann), German (Maas & Van Suchtelen), Frisian (Frysk & Frij), Japanese, French and Russian.

You see I love you, love

I once sat quietly and read

You stand so very still

The trees were all still

The sun. Yellow and gold is the world

Oh, the cool black breath of the nighttime draws near