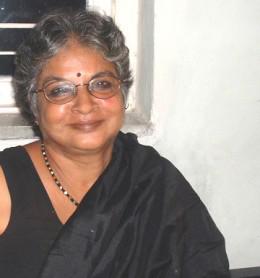 (India, 1940)
Biografie
Eunice de Souza is an English-language poet. She has published four volumes of poetry, two novellas and edited several anthologies of poems and essays. Her most recent publication – A Necklace of Skulls, a volume of collected poems – was published by Penguin India in 2009. Her work has been translated into Portuguese, Italian, Finnish and Swedish.
De Souza retired as Head of the Department of English at St Xavier’s College, Mumbai, in 2000 after thirty years of teaching. She holds a Masters from Marquette University, Wisconsin, USA, and a doctoral degree from the University of Mumbai.

A quintessential de Souza poem is an intensely concentrated, highly charged verbal utterance. The combination of ferocious economy and urgency makes it a ‘pressure-cooker’ experience; the hiss and steam linger on even after the page is turned. This is particularly true of the poems in her first book, Fix, which seem to scorch the page with their acid irony. The poems get less angular in the later books, but the best retain their voltage, and their form remains as taut and consciously attenuated as ever. “Even this poem has forty-eight words too many” says de Souza with typical severity in a poem in which there are fewer words than that.

While her first book emerged from what she calls “a slow burning fuse about my community” (the Goan Catholics of Mumbai), de Souza believes her poems have grown “calmer, more nuanced, less one-dimensional” over the years. “They concede inadequacies in myself as well,” she once told me. “I feel I’ve become a better poet over the years.”

Her aspiration, she says in her introduction to her recent book of poems, has always been to write “lyrical poems with soft, sensuous and passionate lines”. It is a surprising admission from someone who otherwise alludes to her persona in one of her poems as “a sour old puss in verse” and whose book is entitled A Necklace of Skulls. To my mind, the strength of de Souza’s poetry has always been its economy and its astringency. This irony – whether corrosively pungent or more gently wry – certainly does not mean an absence of feeling; its intensity suggests, by implication, a quest for a truer compassion than the variety invoked by more florid effusions of sentiment.

From her scathing snapshots of her own Catholic community in suburban Mumbai to the gentler love poems (with their acknowledgement of a soiled self), the poems in this selection offer a glimpse of de Souza’s slim but significant oeuvre across three decades. The hallmarks of her style – the finely pared sharpness of line and the savagery of understatement – are evident in these eight poems.

Interestingly, one finds not just moments of heat in these pressure-cooker utterances but instants of sudden luminosity as well.
© Arundhathi Subramaniam
Bibliography

It’s Time to Find a Place