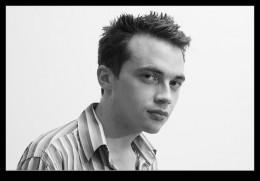 (Verenigd Koninkrijk, 1978)
© Chris Cousins
Biografie
John McCullough was born in Watford in 1978 and grew up there during the eighties and nineties. He studied English and Creative Writing at the University of East Anglia before completing an MA in Sexual Dissidence at the University of Sussex, followed by a PhD on Shakespeare and friendship. He still teaches creative writing there now, in addition to similar work at the Open University. His poems have featured in The Rialto, The Guardian, London Magazine, Ambit, Magma, Staple and Chroma. He’s an active and popular member of the Brighton literary scene.
Widely read, John cites his main influences as being American: August Kleinzahler, Elizabeth Bishop, Frank O’Hara and the Anglo-American Thom Gunn, loving “their willingness to explore a wider range of subject matter than is usually found in English poetry magazines and that consequent need to find new, exciting means of expression”. He particularly relishes the textures Kleinzahler creates through his fusion of different vocabularies: quantum physics, street talk and ad-speak all jostling in the same stanza. Taking on a subject for poetry like 21st-century queer life in England requires that kind of commitment to original language.

Much of John’s poetry occurs in urban settings: council estates, busy trains, 24-hour cafés, pubs, city streets; though living in Brighton, the sea is an inescapable presence. Many of his poems engage with contemporary urban life with vigour and wonder; a train journey into Brighton station has him observing “the tannoy lady who is Our Lady, surely, / with a mobile altar of Ribena and Coke; / the suits with Guardians hiding Heat magazine.” (‘Reading Frank O’Hara on the Brighton Express’).

Light and darkness, both literal and metaphorical, are themes that crop up often in his poems. Having worked in some of Brighton’s less salubrious — some, frankly, violent — pubs over the years, John’s work observes and celebrates some of the marginalised characters he’s met, and enthusiastically explores sub-cultures, with their rich, hidden languages, to recreate their voices and bring them from darkness to light. In his exquisitely cadenced poem ‘Georgie, Belladonna, Sid’, he delights in bringing to our attention Polari, an English homosexual and theatrical slang, which was prevalent in the early-to-mid twentieth century.

His concerns are not exclusively urban and grounded, however; he likes to look up, to look harder, beyond immediate revelation — to explore the metaphysical as well as the physical. In ‘Known Light’, he wonders at the universe, a would-be alchemist in search of enlightenment: “Reveal yourself, sweet familiar, I whisper to glass / before I’m blinded by a white heat / of a magnesium heart.” Alongside this, his character sketches are dynamic, sharply observed and unsentimental, as in ‘The Barman’s Fantasy’:

stares into a Carling’s brassy depths
and finds, she announces, two ghosts

both rent, in fifties leather, jerking off
to the bleeps of the fruit machine.

Yet there’s a sense of wonder in these poems, a delight in the universe; a sense that life can be perpetually strange and fascinating; that we’re always on the edge of something new. John McCullough is a poet for whom language is a flexible gift. He can be formal and controlled, colloquial and intimate, sensuous and saucy. He enjoys risk-taking in his work, forging unusual juxtapositions of images and ideas, and it’s this playfulness and humour which makes his work, like a stiff sea breeze suddenly hitting you in the face, so refreshing and invigorating.
© Catherine Smith
Bibliography