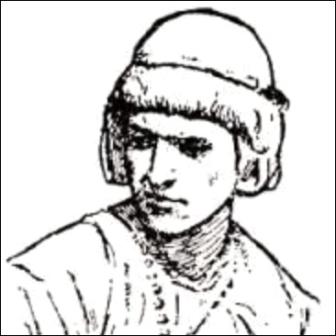 (Portugal, 1482 - 1552)
Biografie
One of the finest poets of the Portuguese renaissance, Bernardim Ribeiro moved among genres with ease. Ribeiro’s sonnets, eclogues, and first-of-its-kind pastoral romance, Menina e Moça (Maiden and Modest), together constitute the purest expression of saudade. Now something of a shopworn term, saudade  – “yearning” and, etymologically, “solitude”, if the word in fact descends, as some believe, from the Latin solitate – was a potent weapon in Ribeiro’s hands, imbuing his poetry with nostalgia, melancholy and, most originally, psychological terror. Little is known about the poet’s life, although his enigmatic verses have given rise to a host of theories regarding Ribeiro’s ancestry, amorous misadventures, and place in the Portuguese court.

Born around 1482 in Torrão, a small town in the austere plains of central Portugal, Ribeiro was the son of a treasurer to the Duke of Viseu.  After completing five years of legal education at the University of Lisbon, from 1507 to 1512, Ribeiro entered into the orbit of King Manuel I. One of the most eminent poets of the Portuguese court, Ribeiro was a friend and poetic interlocutor to Francisco Sá de Miranda (to whom Ribeiro alludes in his second eclogue, using the partial anagram Franco de Sandovir). Both poets were featured in the Cancioneiro Geral de Resende, an influential poetic anthology, first published in 1516, that sought to revitalize the Portuguese songbook tradition by adopting Castilian trends towards allegory and neo-classicism.
Published posthumously in 1554, some fifty-one years prior to Cervantes’ Don Quijote, Menina e Moça arguably marks the birth of Iberian narrative as we know it today. Brimming with mystery and possible autobiographical references, Ribeiro’s novella became an object of renewed scholarly interest in the wake of Portuguese writer Hélder Macedo’s 1977 study On the occult significance of Menina e Moça. Conducting a rigorous historical analysis of Ribeiro’s text, Macedo concludes that Ribeiro was a marrano, or crypto-Jew. While it’s true that Ribeiro’s poetry and prose works broadly treat traditional Jewish themes, including exile and longing for the homeland, the best evidence in favor of Macedo’s theory are the circumstances in which Ribeiro’s work first appeared. The earliest-known print edition of Menina e Moça was issued by Abraão Usque, a Sephardic Jewish publisher from Ferrara, Italy, who printed titles written almost exclusively Jewish authors, including his brother Samuel Usque’s noted dialogue on the sufferings of the Jewish people, Consolation for the Tribulations of Israel. If Macedo’s theory of Ribeiro’s Jewish origins is not true, Menina e Moça would be the only work written by a non-Jew to have been published by Usque.

Other scholars have tended to view any thematic overlap between Ribeiro’s and classical Jewish texts as purely coincidental. Instead they identify Ribeiro’s failed romantic relationships with ladies of the Portuguese court as the emotional source for Ribeiro’s poetry. That his writing should serve as an adequate vessel both for cabbalistic thought and courtly gossip only underscores Ribeiro’s talent: he produced irresistibly indeterminate verse and prose, onto which readers may project several meanings.

Focusing his matchless powers of description on a poetic subject who is often racked by indescribable terror, Ribeiro put a meaningful twist on the poetry of courtly love. The poet swaps out the imperious senhoras of the cantigas de amor for more nuanced feminine characters. In the second eclogue, for instance, it is the masculine poetic voice who is abandoned by his beloved, in a memorable role reversal. This is just one of the ways that Ribeiro manages to sublimate courtly love into a poetry of existential pain.
© Adam Mahler
BIBLIOGRAPHY

Between myself and me

In the face of so much change