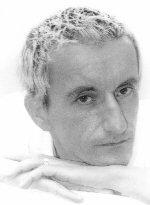 (Slovenia, 1958)
© Diana Andelic
Biography
Brane Mozetič is a poet, writer, translator and editor who graduated in comparative literature from the University of Ljubljana. He also pursued an advanced degree in comparative literature in Paris.
Since 1990, Mozetič has been the editor of gay magazine Revolver. He has translated a number of French authors, among which Rimbaud, Genet, Foucault, and Brossard, published ten poetry collections and three works of fiction, winning the City of Ljubljana Poetry Prize and the European Poetry Prize-Falgwe. His poems have been translated into various languages. Mozetič is currently the director of Center for Slovenian Literature. A poet who has not shied away from strict forms, Mozetič writes in a feverish style of the evanescent experience that is a poignant reflection of the postmodern condition and its narcissism.
© Iztok Osojnik
Links

loving you frightens me Can you hear it, Dave, that noise outside What happened? It’s midnight almost and I silently stare When I arrive
Poems
Poems of Brane Mozetič

loving you frightens me

Can you hear it, Dave, that noise outside

Love Ana, Ljubljana is a nightmare

They wouldn’t give anything to help me

The dog runs about the meadow as I watch

It seems that missiles have lit up the sky

Friday is the day you think of death