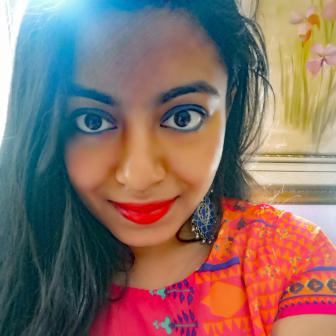 (India, 1991)
Biography
The work of Shubham Shree, a Hindi poet based in Delhi, shot to prominence when her poem, ‘Poetry Management’, was awarded the 2016 Bharat Bhushan Agrawal Prize by the Hindi poet, Uday Prakash. Her work has been translated into English by US-based writer and Hindi-Urdu translator Daisy Rockwell and Indian poet Akhil Katyal.

The decision to award Shree the Bharat Bhushan Agrawal Prize was greeted by a storm of online protest. The poem, an indictment of a literary world tainted by opportunism, mercantilism and politics, was slammed as unpoetic, prosy and leftist. In an essay defending the poet in Scroll, the well-known poet Mangalesh Dabral writes, “Most of [Shree’s] poems deal with the inner world of the Hindi academia, leftist politics, male chauvinistic behaviour and radical feminist discourse…. Irony, dark humour, questioning and extremely playful language have been her weapons of dissection. With these, she has created a niche for herself in a short time while remaining aloof from the literary hullaballoo.” The poet herself says in an essay by Daisy Rockwell for Caravan: “One must avoid Hindi to write in Hindi, and to keep writing, one must avoid the literary world.”
A tonal irreverence, exuberance and absence of affectation seem to be the distinctive characteristics of Shree’s politically aware poetry. Sassy and provocative, her work alternates between lighthearted wisecrack and hammer blow, between sly dig and brutal satire. Her casual cosmopolitanism, unapologetic slanginess, impish mix of registers, and tongue-in-cheek use of what Rockwell calls “crassly pedestrian terms”, imbues her poetry with an unexpectedness. Shree employs on occasion the very idiom she parodies, which might have led, as Rockwell points out, some readers to overlook the spoofy and subversive intent of her work.

In a scathing portrait entitled ‘The Daily Life of Trivedi-ji’, Shree conjures the image of a complacent, self-consciously upright bourgeois gentleman, proud of his daughter's “little English”, who gives lectures on Tulsidas, writes columns bemoaning the decline of Indian culture, and is momentarily sidetracked by a student’s bra strap. A poker-faced poem essay on ‘my boyfriend’ describes the species in breathless schoolgirl tones of awe and rapture: ‘My boyfriend is a two-legged boy human/ He has two hands, two feet, and one tail/… At home, he’s Babloo, on his notebooks, Umashankar/ His name is also Baby, Sweetie-pie and Darling.’

The poem to Simone de Beauvoir, more reflective in its admission of a shared vulnerability, closes with the poet wishing she could share Beauvoir’s emancipatory potential with other young women. Perhaps the seeds of rebellion will be surreptitiously sown, she says, when some of these new readers “begin to store their bangles/ wrapped/ in the pages of The Second Sex”.

In her biographical note, Shree speaks of her love-hate relationship with her language: “I have paid fines in school for speaking in Hindi, beaten up at home for ‘using’ Hindi during study hours. Forced to eat, sleep and drink in English.” In her college years, she says, her awareness of the language hierarchy intensified. On the other hand, she also had to confront what she calls “a deeply casteist and misogynistic public sphere” of Hindi literature. Utterly at odds with what current wisdom stipulates as the ‘ideal’ in Hindi poetry, she says, she now finds herself at frequent odds with “what the poet Avinash Mishra calls the ‘Hindi-Sahitya-Sansar’ (Hindi Literary World).”

Interestingly, Shree is reluctant to publish her first book of poems, claiming that she is yet to find her voice as a poet. “I feel like I’m living in someone else’s language, as if I am merely assembling bits and pieces borrowed from someone,” she says. And yet, she adds, that while the world is full of interesting pursuits and pastimes (she juggles two day-jobs in addition to her creative writing), it is only the maddening art of poetry that manages to drive her “crazy from inside”.
© Arundhathi Subramaniam
Bibliography

Links on the controversy
Scroll
Caravan

MY BOYFRIEND JUST FOR YOU, SIMONE ABOUT THAT BOY THE DAILY LIFE OF TRIVEDI JI
Poems
Poems of Shubham Shree

JUST FOR YOU, SIMONE

THE DAILY LIFE OF TRIVEDI JI