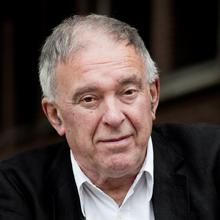 (The Netherlands, 1936 - 2021)
© Allard de Witte
Biography
K. Schippers (the pseudonym of Gerard Stigter; Amsterdam, 1936) made his first appearance in Dutch literature in 1958 as the editor of an unusual magazine. Barbarber portrayed everyday reality with an ironic verve that was in stark contrast with the expressionism of the ‘Fifties’ poets who formed the dominant movement at that time. The method has produced countless drily comic classics such as ‘The car owner’: “A man gets into a car / carries out the transactions required / for driving / after which he / indeed / drives away.”

These are modest poems and their lack of pretension is a typical feature of Schippers’s work – it is substantial but the tone is always modest. From his first collection, De waarheid als De koe (literally, Truth Like a Cow) right up to Tellen en wegen (Counting and Weighing; 2011) Schippers’s poems are never about the state of mind of the poet; rather he observes and shares with his readers what he feels is worthwhile. And this doesn’t have to amount to a great deal. What is more, the smaller and more banal the observation, the better it is in his view, whether it is the address of the Rijksmuseum, or the fact that everything has a colour.

Schippers does not confine himself to the traditional forms of poetry; if a photograph were a more appropriate illustration for the point he wished to make, he would use a photo. If he wants to describe the route of a fly over the surface of a magazine, then he draws a line across the letters. And if a poem doesn’t need any words because it is called ‘Vlieland sand flats’ and so consists of “sea water, sand and plants”, the rest of the page remains empty.

Schippers likes to write about artists who have inspired him; he will never present another person’s discovery as his own and he takes pleasure in sharing things. He was awarded the P.C. Hooft Prize for his essays. Besides writing, his favourite medium is film; he has made a few films with Kees Hin, and the cinema is also the theme of some of his essays and of his novel Waar was je nou (Where Were You?), for which he received the Libris Prize for Literature.

Marcel Duchamp is probably the artist who has had the greatest influence on Schippers’s work; not just because of his discovery of the ‘readymade’ – the ultimate homage to the beauty of reality – but also because of his wit and ability to put things in perspective. And these are the two other qualities that you immediately associate with the work of K. Schippers.

AN ESTIMATE OF MISSING WEIGHT

things you only need to remember briefly