Writing and performing in freedom in Rotterdam

Every year Poetry International invites a poet who, for economic, social or political reasons, cannot work in freedom in his or her home country to do a residency in Rotterdam. Here the poet is given every opportunity to write, to be inspired by the city and its inhabitants, to gain relevant contacts in the literary and cultural field, to give workshops and, of course, to perform. The residency ends with a performance at the Poetry International Festival and a publication of texts written during the residency with translations into English and Dutch.

During the stay of around six weeks, the guest writer can be followed during lectures and interview programs organized in various places in the Netherlands and Flanders. To this end, Poetry International collaborates with universities and bookstores and venues such as Perdu, Spraakuhloos, Verhalenhuis Belvédère, Dichters in de Prinsentuin and DeBuren.

The residency program is made possible by a financial contribution from the Ludo Pieters Guest Writer Fund.

From 1 June until 18 July 2022, Nhã Thuyên, pseudonym of Do Thi Thoan, stayed in Rotterdam as Poet in Residence, to write, (co-)create and perform at various events. She has performed at Leeszaal West during the Literaire Maaltijd (Literary Dinner), at Woorden Worden Zinnen X Paginagroots X Poetry International (Tell 'M/Spraakuhloos), at Dichters in de Prinsentuin in Groningen and of course at the 52nd Poetry International Festival and in Verhalenhuis Belvédère. Together with artist Danielle Davidson she has created the visual poem 'Kraai, Walking a Letter Home'.

Nhã Thuyên was appointed lecturer in Vietnamese literature at the University of Hanoi in 2012, on the basis of her dissertation on four activist Vietnamese poets, but after a wave of propaganda prompted by the tightening of the country’s political regime she was fired in 2014, and she was stripped of her Master’s title. This simply served to strengthen the critical attitude she had already revealed in her ideas and in her writing. Nhã Thuyên chooses a very wide range of subjects and perspectives. Often an I attempts to get a grip on a situation in an everyday environment, amidst a flow of associations, by acting, speaking and by responding to and reflecting on the risks of that action. Her poems also express a longing to be boundless and intangible. The language is playful, dynamic and gives the poems momentum, producing a gripping result of insistent poetic quality.

A book containing three poems by Nhã Thuyên in Vietnamese with English and Dutch translations, together with a print of the visual poem 'Kraai, Walking a Letter Home' can be ordered here (€ 10,- and shipping). 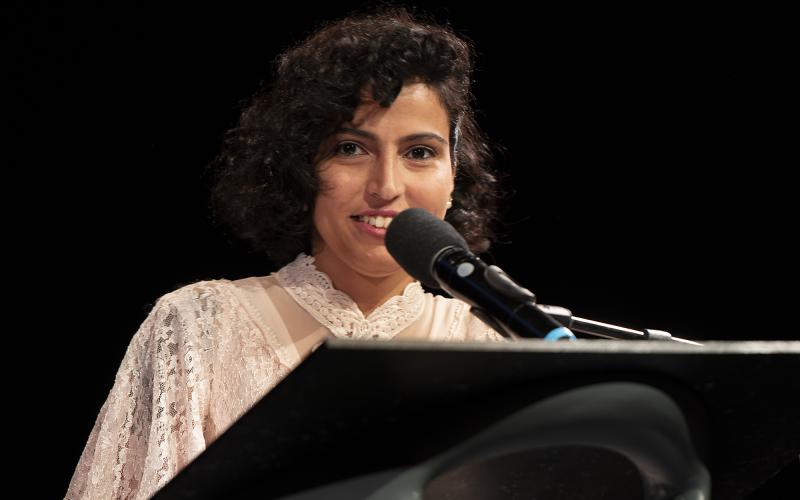 Poet, translator and journalist Mona Kareem was born in Kuwait but lives in the United States, where she earned a PhD in Comparative Literature. She is the author of three collections of poetry in Arabic. Her first collection will be published in English in 2020. Born herself as a "bidoun," a population considered stateless and denied citizenship by the government of Kuwait, she is pushing against the violation of civil rights in her journalistic work. Her poetry contains a strong female voice that convincingly articulates political and social, as well as personal, issues, with room for humor and lyricism.

Poems she wrote here have appeared in the Arabic-, Dutch- and English-language collection Femme Ghosts / Vrouwelijke geesten (Publication Studio). One of the poems is the acclaimed "Eulogies for futures to come," which Kareem performed with the Metropole Orchestra during the festival opening. The translations into Dutch are by Nisrine Mbarki. The collection costs €8 (+ postage) and can be ordered by mail from Poetry International. 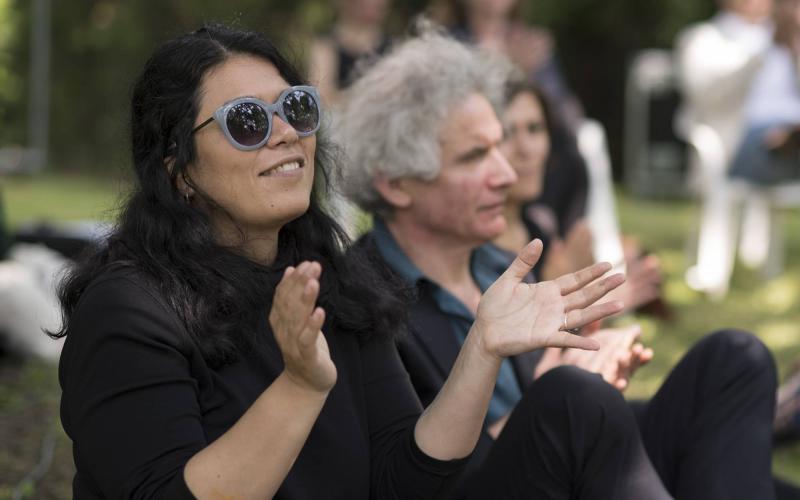 Dolores Dorantes was supposed to participate in the Poetry International Festival in 2012 but had to flee her homeland just before leaving for Rotterdam because of death threats. As long as her asylum application was pending in the United States, she could not travel, and she had to miss the festival. It is therefore extra special that she was our guest here in Rotterdam for six weeks in 2018 as poet in residence.

"Hacer es deshacer." Her poetry constructs and deconstructs, remembers and lets forget, gives language to the cruelty, pain and violence of her homeland and also questions this language again. The female voice, always plural and ambiguous, has a central role in Dorantes' work. In addition to her writing, she is a priest in the Buddhist Mahajrya tradition. 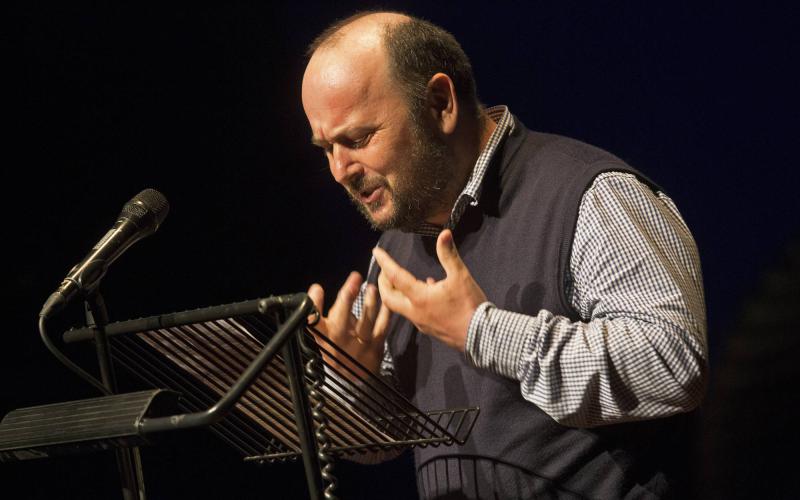 "the people who knew my father knew a strong and courageous man. I don’t resemble him one little bit. I’ve come to realise this with every passing day since he died."

In 1994, Dumitru Crudu debuted with two books of poetry simultaneously. Since then, he has written seven plays, novels and collections of short stories. Crudu's poems are narrative. They tell personal histories and at the same time paint a more general picture of life in the former Soviet republic. With humor, Crudu's poetry highlights the everyday, as well as major themes such as illness and death. His poetry is in the midst of reality and then depicts it in a completely unique way. Crudu belongs to the movement of "Fracturism," a movement developed by writers who write as they live and banish social lies from their poetry. 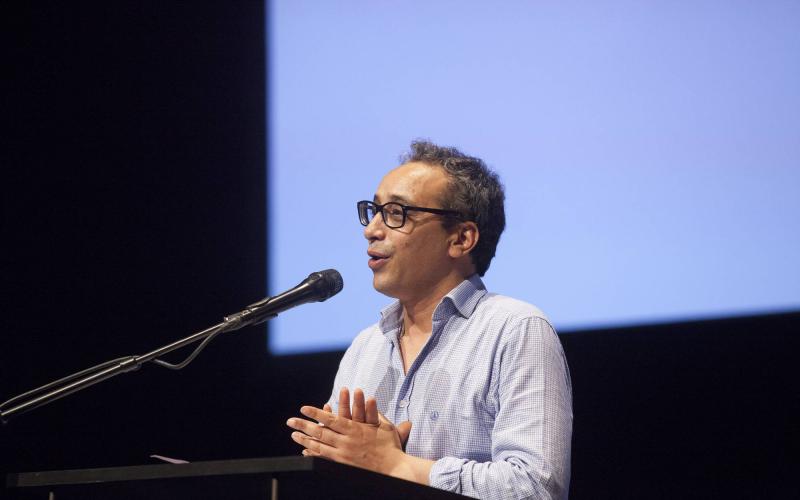 "I check my bag for the tenth time/ lest I forget inside what might prompt the alarm at the customs’ gateway/ I fumble for the passport in my pocket,/ like someone trying to get rid of a bomb/ planted in the heart"

Journalist and radio correspondent Abdel-ilah Salhi is a skilled and inspired storyteller. His poetry is therefore characterized by a strong narrative character. In a light tone, he illuminates the humor and tragedy of our daily concerns, often from a surrealistic perspective. Living in France, his sources of inspiration. are often French, but he writes in Arabic. Once in France, he seized the opportunity to delve into modern Arabic literature in exile; in fact, many exiled Arab writers lived in France. This is how he met the Iraqi poet Abdelkader Al Janabi, and through him he also came into contact with the group of Arab surrealists in Paris. 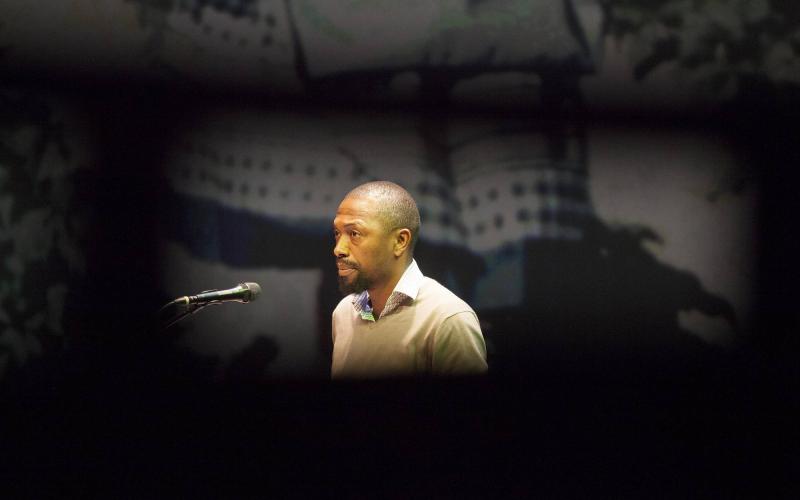 "We are marching him to rest. It’s simple and sad things like this that need not be rehearsed, we are born to death and bred to carry its weight. I can’t help but think how different he looked as he slowly approached his end: a reversal of fire in his eyes, a back-burning – as though he was being reclaimed, as though whatever he thought he had was not his."

Togara Muzanenhamo worked as a journalist for many years until he started farming to better focus on his poetry. As a poet, he likes to isolate himself; working hours on the farm suit him and give structure to his poetry. In the mornings he works in the fields, in the afternoons he writes poems. The tone of these poems changes, from deeply saddened when it is about a lost home or father, light-hearted and euphoric when he describes unspoiled landscapes, to resigned to the realization that life in the country simply doesn't change much. 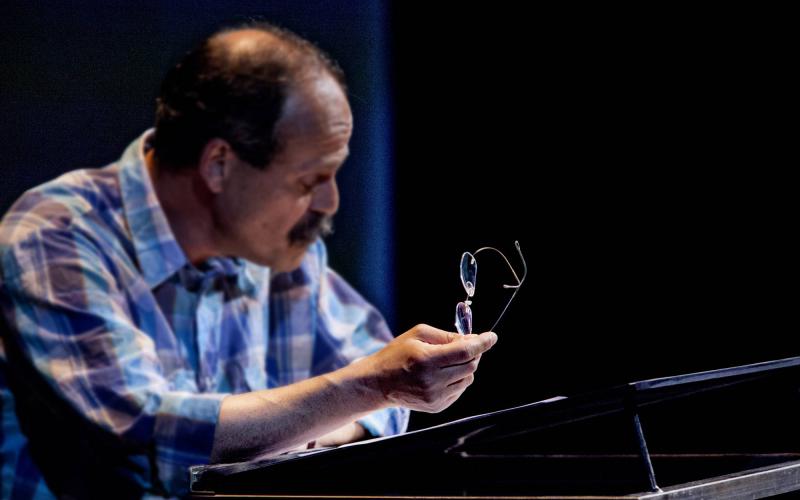 "Am I more out of place here or in Istanbul?Why am I more at home on water than whenI have both feet planted firmly on some land?And why, on the threshold of turning sixty,do I still expect these questions to be answered?"

With eyes and ears wide open, Roni Margulies gives his impressions of Rotterdam a place in his beautiful poems with almost photographic precision. Margulies is fascinated by the past. Identity, migration, borders, language and oppression are also themes in his work. Subtly and in clear words, he writes about big events based on small observations. What strikes him in the port city and how does he reflect on it in his poems? We look forward to a happy reunion with the Turkish poet who was also a guest at the festival in 2008.